Good thing Kevin Costner has so many suits. The actor is headed back to court, but this time for his shrubs. He is being sued by his neighbour for growing a hedge over 6 feet tall. 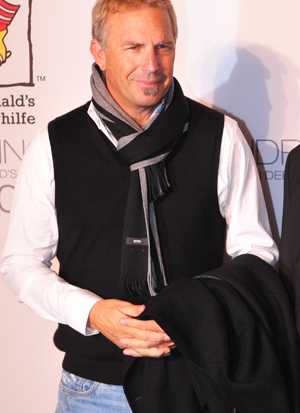 As they say, when it rains, it pours.

Kevin Costner will have to go lawyer shopping once again, because the actor was slapped with yet another lawsuit.

As soon as Costner freed himself of Stephen Baldwin’s greedy claws, his friendly neighbour found a bone to pick, and he’s taking it to court. Charles Grimm is suing the actor for breaching a 55-year-old contract that dictates he may not grow any vegetation over 6 feet in height.

The contract (which stipulates a 6-foot plant limit) was implemented back in 1957, when the Santa Barbara property in question was subdivided. The plaintiff claims Costner planted 10-foot conifers to obstruct the view of the “star-struck” tourists renting Grimm’s house, but the shrubbery also blocks the view of the seaside and subsequently devalues the property.

Grimm is hoping the court will order the actor to trim the shrubs to the 6-foot height and allot him $150,000 in compensation. He is also willing to just settle for $500,000 in damages.

Those must be some pretty traumatic shrubbery to licence such a hefty payout. This just reeks of money mongering… Unless Grimm requested Costner to trim the hedges as soon as they crossed the 6-foot limit, the latter rejected the request and Grimm ran straight to court. But if that’s the case, the damages fee should not be that high, and there should not be an either-or option.

It sounds like Mr. Grimm was making a profit from having Costner live next door and is seeking damages not because of the obstructed view of scenery, but the blocked panorama of the actor’s property.

Kevin Costner on lawsuit: “My name is at stake!”
You’re out! Jury in favour of Kevin Costner
Whitney Houston’s funeral plans revealed