What’s the latest trend in shedding your child star image for good? According to Shia LaBeouf and Daniel Radcliffe, it’s appearing in an obscure band’s music video and doing outlandish things. Could this be the start of a new former child star trend? 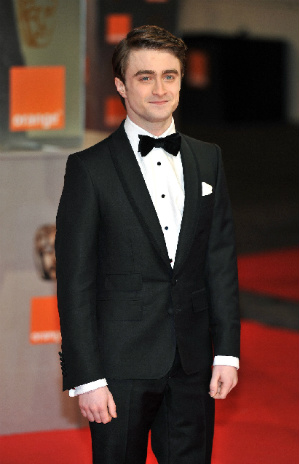 For anyone who missed the memo, we’re just making sure you’re all aware that Shia LaBeouf and Daniel Radcliffe are grown-ups now. Of course, we don’t really think the point needed emphasizing, given that the former Disney Channel and Harry Potter stars, respectively, have already moved well beyond their squeaky clean, child star images and into more mature territory — Shia with his Transformers franchise, Daniel with his (naked) Broadway stage debut in Equus. But apparently the famous young men hadn’t quite finished convincing us of their maturity, since they are now both starring in separate music videos that feature them doing very grown-up things, erasing any trace of Mickey Mouse or Hogwarts.

Shia, who got his start on the Disney Channel original series Even Stevens, can be seen in the music video for Icelandic band Sigur Ros’ new song, “Fjogur Piano.” The video, according to a press release, follows “a man and a woman locked in a never-ending cycle of addiction and desire.” Shia, of course, plays the man half, and the video features him and his onscreen lady love in la total beouf. What ever would Ren say? Meanwhile, Daniel Radcliffe can currently be caught getting belligerently and irresponsibly drunk in the new video for “Beginners” by the British music duo Slow Club. Harry’s clearly graduated to something a little stronger than butter beer.

So what’s the deal? Why would two young actors with reputations to uphold and with such promising futures throw us the curveball of starring in controversial music videos by relatively unknown, niche artists that, compared to most of their other work, stand to be seen by a mere fraction of their fans?

Here’s what we think: Shia and Daniel are leading what could very well be the latest trend in young celebrities shedding any last remnants of child stardom. It simply isn’t enough anymore to get naked on stage or to get really beefed up and fight a bunch of super-strong robot monsters. These days, former child stars need to prove they’re up for absolutely anything — the more controversial, obscure and art house, the better. That means dropping trou on camera while doing an interpretive dance in tights and a fur vest (true story — watch Shia’s video if you don’t believe us) or getting recklessly drunk to the point of sweet oblivion. Being a box office draw is cool, but being a box office draw who is unfazed by his own fame and more interested in meaningful, small-scale art is way cooler. And definitely very grown-up.

So take note, all you Demis and Selenas and Mileys of the world: If you want to officially cross over into the world of legitimate artistry and incontestable maturity, you better find your way into the music video of a band most people have never heard of. And make sure you’re doing something that will make us all clutch our pearls with pride and respect.

Rihanna’s a positive female role model? Who knew!
Adele’s song wakes girl from a coma
How to deal with a naked stranger in your bathroom