Rihanna inadvertently became the positive role model she once claimed she wasn’t, thanks to her proclaimed disappointment at having lost some of her precious weight. It’s rare that a celebrity speaks in favour of having some meat on her bones, and we applaud Rihanna and the other female stars who prefer looking curvaceous to looking like a telephone pole. 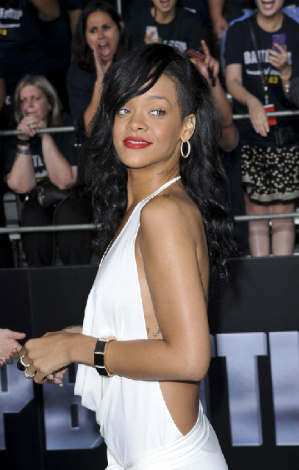 Wasn’t it just yesterday that Rihanna was being slammed for posting a sizable collection of bordering-on-trashy self-images to her social media profiles? And isn’t Rihanna the one who, much to the chagrin of those who view her as an otherwise strong female role model, welcomed Chris Brown into her life again after he brutally beat her only a few short years ago? Sorry to break it to you, Rihanna, but you’ve inadvertently become the positive role model you all too recently told British Vogue you weren’t. The famously curvaceous singer recently stated that she is rather unhappy with her currently size zero frame, apparently the result of a rigorous schedule and little downtime. Rihanna mourns the loss of the booty she once had and even said she “prefers [herself] a bit chunkier.”

It is all too rare that celebrity women openly celebrate their meatier frames, as opposed to fighting nature and trying to fit into Barbie’s wardrobe. In an industry that relentlessly reaffirms the apparent necessity of being a stick figure, lest career struggle and public ridicule come a-knocking, there are thankfully a precious few women — Rihanna included — who show us that being bigger is not a one-way ticket to failure. Rather it is something to be celebrated and, dare we say, desired. Below are some other celebrity (belly) roll models we applaud and thank.

After her colossal Grammy win earlier this year, Adele seemed to be the only subject of conversation for a while. But it wasn’t just her new hardware that had people talking. Adele, arguably one of the most skilled vocalists to emerge in recent years, found herself under fire about her weight. Karl Lagerfeld, Chanel’s creative director, commented that Adele was “a little too fat” despite her lovely face and voice. As well, Jennifer Hudson — who was once plus-size herself but is now the barely there spokesperson for Weight Watchers — offered Adele some unsolicited weight-loss advice mere moments after Adele’s big Grammy wins. To them — and to the rest of her critics — Adele maintains that “weight has nothing to do with [her] career.” Adele knows she represents the way most women look, and she says she is proud of that fact. Adele, who claims to have never felt insecure about her body, is proof that to have a successful career as a singer, you don’t need a spandex-ready, meatless body; all you really need is a game-changing voice.

It’s true that the name Kim Kardashian isn’t exactly what comes to mind when considering positive female role models. However, when it comes to her weight and shape, Kim has earned her place on the role model list right next to Adele and Rihanna. Despite the fact that she’s been continually in the spotlight for the last several years, Kim has never tried to pretend her curves are something she could (or wanted to) take control of. Often when a star gains a lot of attention in a short amount of time, she coincidentally drops a bunch of weight and tightens up. Not Kim. She is clearly aware her dramatic curves are decidedly what has helped make her so famous. Kim’s silhouette is a sexy sight for sore eyes that are so accustomed to seeing wispy clothes hangers walk down the red carpet. Thanks to Kim Kardashian, many women have embraced their own fuller figures and can actually feel pride in the fact that they look like women and not surfboards.

How many actresses wish they had the guts Mila Kunis has? And we mean that both figuratively and literally, since the actress, who famously shrank to a scant 95 pounds for her role in Black Swan, has recently let her belly expand at will. Speculation first arose that the petite actress must be pregnant (which is not true). People then figured she gained the weight for the sake of a role. Whether or not that’s the case, Mila, a self-proclaimed foodie, maintains an inspiringly blase attitude about her weight gain. Yes, she’s bigger for now. So what? When she wants or needs to lose it again, she will. It’s simply a matter of will power, which she clearly has in spades, as we know from her Black Swan transformation. For now, she’ll just eat the food she wants and not worry about the results.

Fun fact: Lindsay Lohan was banned from driving while filming
Celebrity legal: Hilary Duff gets sued over fender-bender
How to deal with a naked stranger in your bathroom