Celebrity relationship alert: It looks like Bradley Cooper may have snagged him one of the hottest actresses ever. The hottie actor reportedly wined and dined the young Hollywood starlet, suggesting the two may be taking their friendship status to a whole new level. 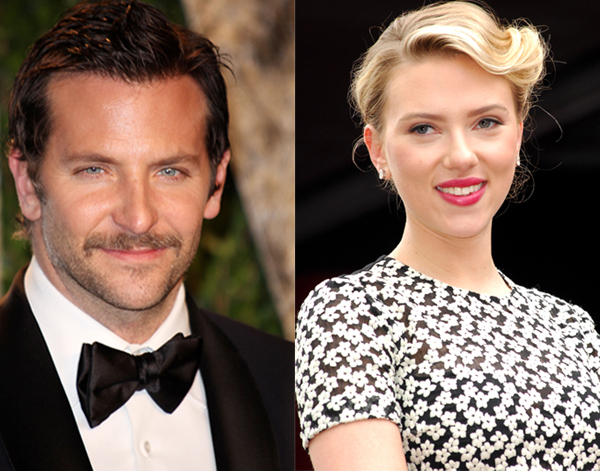 It looks like a celebrity romance may be in the air!

Hangover star Bradley Cooper and Hollywood beauty Scarlett Johansson are making the celebrity rumour mill go crazy after reports that they were spotted out on a date together. According to RadarOnline.com, the two were seen dining out last week at the Wolfgang Puck restaurant, and an eyewitness says they appeared very flirtatious with each other.

“They seemed very comfortable together, and it was pretty obvious they are into each other,” says a source to RadarOnline.com.

So how much was The Avengers starlet into Bradley? Well, so much that she even used a few natural human mating rituals, such as flipping her hair and laughing at his jokes, while he admired her stunning looks and body.

Although this is just a rumour — for now, anyway — we can’t help but wonder what happened to Scarlett’s relationship with her advertising executive boyfriend, Nate Taylor? She looked happy with him when they were seen together out and about in New York City a few months ago. Well, whoever the 27-year-old is dating, she should definitely be careful with Mr. Cooper, since his long list of exes consists of such celebrity beauties as Renee Zellweger, Jennifer Lopez and Zoe Saldana. But according to the source, Scarlett may have the upper hand in this courtship, since Bradley really likes her.

“The chemistry between them [was] very evident, and they looked totally wrapped up in each other… They were definitely having more than a “friends” dinner. It seemed pretty obvious they totally have the hots for each other.”