The first (fashion) lady of the U.S. and Barack Obama attended a dinner political fundraiser at Sarah Jessica Parker’s home in New York. How’d it go? 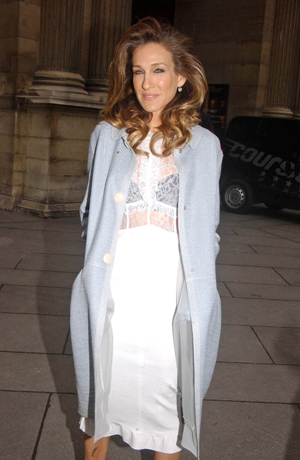 Well, almighty Zeus knows that Sarah Jessica Parker has suffered enough for this fundraiser. But Barack Obama needs moolah, and he ain’t afraid to reach into the fashion industry’s pocket.

Parker’s fashionable Obama fundraiser (thrown at her New York home) has been quite a success. The 50 guests forked over a mere $40,000 per plate! The meal better have been gilded and infused with some aphrodisiac… Just sayin’.

The four-storey home in the West Village was brimming with the creme de la creme of the fashion world, like Michael Kors, Meryl Streep and, of course, Anna Wintour.

Oh, Barack and Michelle Obama were also there… Sorry, got distracted.

“I recognize that most of you are here to see Michelle,” Obama quipped with the guests. “I always explain I rank fifth in the hierarchy in the White House. There’s Michelle, my mother-in-law, the two girls and Bo. So that actually makes it six. In terms of star wattage, people come to the White House and say, ‘Where’s Michelle?'”

And then the lights were dimmed, touching classical music was played and, in an inspirational, deep voice, Obama addressed the crowd:

“We’re going to have to fight for it because, the American people are tired. They’ve gone through a very tough economy. They’re still having a tough time. And that’s why this election is going to be close.

“The other side is going to spend $500 million with a very simple message, which is, ‘You’re frustrated, you’re disappointed and it’s the fault of the guy in the White House.’ And that’s an elegant message. It happens to be wrong, but it’s crisp. You can fit it on a bumper sticker.

That’s how it’s done. This is how speeches should be made in Canada! Americans always have this sense of epic urgency, of dramatic suspense… Our politicians deliver speeches with as much emotional inflection as a chemistry professor reading an excerpt from Lavoisier’s Essays on the Effects Produced by Various Processes on Atmospheric Air, with a Particular View to an Investigation of the Constitution of Acids. (Look it up — great subway commute literature.)

But there ye have it. Fundraiser did what it was meant to, despite the criticism. What do you think? Sharesies.