What’s a woman to do? After leaving The X Factor reality show, starring in a hit summer movie and preparing to get her music career back in action, Nicole Scherzinger is faced with a career decision after it is reported that the X Factor franchise wants her back. 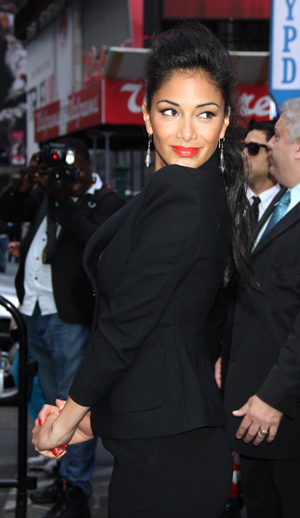 Well, well… Look who is crawling back…

Nicole Scherzinger may have to rethink launching her acting and music careers full force after she was reportedly asked to return to The X Factor.

No, no, not the U.S. version; all those spots are taken. Instead the former Pussycat Doll is set to be a judge on the U.K. version of the singing competition franchise. A source close to the production of the show tells the Daily Mail that Nicole is slated to replace former judge and musician Kelly Rowland, who was unfortunately not welcomed back for another season.

“Nicole has always seemed more relaxed on the U.K. series,” says the source to the Daily Mail. “We love her, and the judges love her. She seems very comfortable on-set and at the auditions.”

Seriously, can anybody on The X Factor make up their mind when it comes to casting judges? We’re looking at you in particular, Simon Cowell…

Although the news has yet to be confirmed by Nicole, it kind of seems a bit of a tricky situation for the stunner, who accepted her departure from the U.S. panel and said she was going to focus on her career.

“I loved being a part of my ‘X Factor‘ family. Nothing could obviously prepare me for everything I had to go through, all the emotions and stuff, but I have no regrets,” said Nicole earlier this year to Access Hollywood about her leaving the show, along with former American Idol judge and fellow X Factor judge Paula Abdul. “I’ve always believed in never looking back and just moving forward, and I’ve got an amazing year to look forward to.”

Well, it looks like Nicole may have to look back just this once and weigh her options, because apparently the show executives really want her back.

“No one really comes close to Nicole,” says the source.

Sigh… You never know what you have until you lose it, huh?

More on The X Factor