Everyone knows her song, and now it’s gaining her major recognition. The “Call Me Maybe” musician has reached new heights in the music industry and couldn’t be happier about all her overwhelming success. 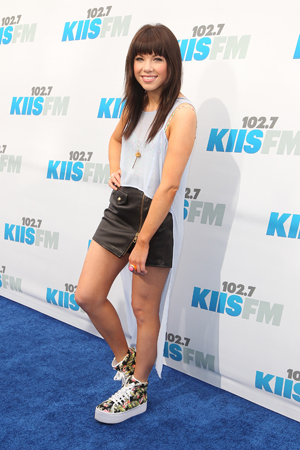 Just call her number one,  for sure.

Canadian pop star Carly Rae Jepsen is breaking new ground with her addicitve and catchy single “Call Me Maybe,” which has just reached No. 1 on Billboard’s Hot 100 charts.

According to The Hollywood Reporter, Carly’s song has been a major hit on all the billboard charts, including Top Digital Songs and Top Radio Songs. But it’s fair to say that the biggest achievement for Carly is making the Hot 100 chart, a position that puts her up there with the likes of female power musicians Ke$ha and Lady Gaga. In fact, the 26-year-old is the first female to nab the spot since Ke$ha for her party anthem “Tik Tok” in 2010, which remained at number one for nine weeks. And though the news was overwhelming for Carly, she pleasantly and humbly expressed her gratitude.

“Celebration time? Celebration time. #1 on billboard. Dreams come true!” tweeted the Canadian Idol alum on her Twitter along with a photo of her celebrating with a bottle of Champagne.

This is definitely a huge accomplishment and a title worth bragging about, especially since everyone from U.S. President Barack Obama to pro athletes have either sang or referenced Carly’s tune. Mentor and biggest Canadian pop star around right now, Justin Bieber, congratulated the British Columbia-born singer on the great news via Twitter.

“Big Shoutout to @carlyraejepsen for getting her first #1 on BILLBOARD HOT 100!! SO PROUD!! CANADA STAND UP!!! ” tweeted Justin.

Carly responded to the Biebs, thanking him for his help and quoting one of his songs.

“@Justinbieber … What can I say? I believe you when you say NEVER SAY NEVER! Thanks for believing in me. Really, really :)”

Her second single, “Curiosity,” was released earlier this month, and many are already praising it as being as worthy as the first single. I guess we’ll have to wait and see how big this song gets. Don’t worry, Carly. No pressure.