The Republicans have lit their torches and grabbed their pitchforks over this already. A decapitated prop head of George W. Bush was featured on Game of Thrones, and not everyone found it amusing. 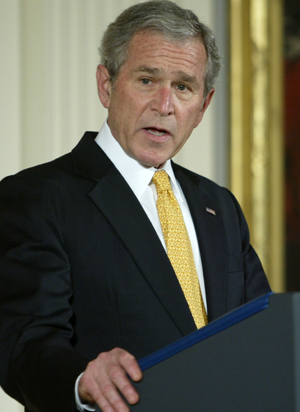 Well, HBO‘s Game of Thrones (GoT) certainly likes to push the envelope (mostly with vast nakedness), but apparently the show crossed a line the Republican party is not happy about…

Apparently after an intensive and pointless investigation, it was discovered that the GoT creators plastered a George W. Bush mask on a decapitated head in one of the show’s gruesome scenes. You can image the dismay of the Republicans.

The “funny” prop was used in a scene where the evil King Joffrey (Jack Gleeson) shows Sansa Stark (Sophie Turner) a collection of decapitated heads of his traitors, one of whom was the former president. Who knew George “Dubya” Bush was an enemy of King’s Landing?

“People may not have noticed this, but back up… The last head on the left is George Bush,” David Benioff and D.B. Weiss stated in the GoT DVD commentary. “George Bush’s head appears in a couple of beheading scenes.

“It’s not a choice. It’s not a political statement. It’s just… we had to use what heads we had lying around.”

Oh no, you didn’t. They should have known that would not fly…

“Whether you like him or dislike him, whether you’re of the same political persuasion or not, we still have to respect the office of the presidency and all of those who hold that presidency,” stated Craig Eaton of the Brooklyn Republican part. “Americans of all political persuasions should stand up and demand that things like this should not continue. They should boycott watching this particular show.”

Everyone knows “free speech” is OK only if it does not offend anybody. This takes us back to our precious past, when the image of the absolutist king was held sacred because he was appointed by God… Which is also the belief of the Republicans about their elected presidents. Hmm…

HBO very quickly composed an apology to fix the dam that was ready to burst in the conservative circles.

“We were deeply dismayed to see this and find it unacceptable, disrespectful and in very bad taste,” the network said in the apology statement.

We need to lighten up. If Americans can’t laugh at their presidents, when is freedom of expression actually permitted? In hushed tones distorted by the blasting of the radio, or subtle innuendos in an oil painting? Come on…