Love, drama and entourages are a dangerous mix. Just ask Chris Brown, who was recently involved in a brawl with fellow Canadian rapper Drake’s entourage, and now the heated squabble is causing rumours that the whole thing started over a very special (and famous) girl. 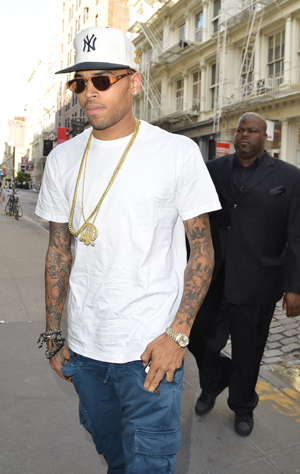 Are Chris Brown and Drake in a rapper love feud over Rihanna?

That definitely seems to be the case after the “Turn Up the Music” artist got into a nightclub scuffle with the Canadian rapper’s entourage, which injured five people.

TMZ first reported the news of the violent fight, which broke out between Chris and his crew and Drake’s crew (Drake wasn’t there) that resulted in the NYPD eventually being called and showing up onto the scene to investigate. Chris was long gone from the nightclub when police arrived, but he still took time to post a picture of his injury on Twitter — which he has now taken down — of a deep gash on the left side of his chin.

So what could have caused of all the commotion? Well, reportedly the fight started over the beautiful Rihanna, whom Chris and Drake were both romantically involved with. Apparently the fight between the crews began with “thrown bottles” and verbal exchanges.

Hmm… Maybe Drake wasn’t happy over the rumours that the ex-lovers were recently seen hanging out together at the same nightclub this week.

Neither Chris nor Drake has commented on what happened, but we have a feeling this love triangle is far from over. But we wonder why this whole scenario has to get so violent. How about Drake and Chris have a head-to-head freestyle battle or a dance-off instead? That would be more safe and entertaining.