Lindsay Lohan is definitely an actress willing to try any genre, even if it means working with someone who takes off their clothes for a living. The Hollywood starlet is in the midst of signing on for a new movie role that is both racy and outlandish and that is sure to broaden her acting range. 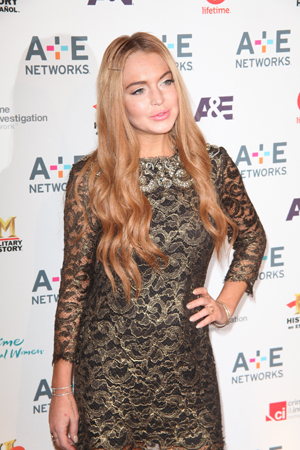 Lindsay Lohan may be entering new territory when it comes to the acting world.

The actress, who has been progressively getting her acting career back on track, is said to be cast for a new role in a film that is perking up everyone’s ears when they hear what it is about and who is in it.

According to The Hollywood Reporter, LiLo has reportedly signed on for the lead role in a film called The Canyons, written by American Psycho writer Bret Easton Ellis. The movie, described as an “indie sexual thriller,” follows the lives of twentysomethings in Los Angeles as they deal with sex and crime.

Sounds very racy; we know this definitely won’t have a similar playful, tongue-in-cheek, PG-13 plot line like Mean Girls, that’s for sure. And what’s even more racy is that one of the actors who will play alongside Lindsay is an adult film star. Yup, Lindsay will be starring alongside pornographic actor James Deen.

“The appeal of this role for Lindsay is getting to work with Paul Schrader. He’s an amazing filmmaker, and it’s an amazing role for her,” says the source. “She couldn’t be happier.”