We’ll miss him on Saturday Night Live, but let’s face it: It’s time to move on. Andy Samberg and his ambitions are taking him to BBC to star in a new television series with Greg Davies. 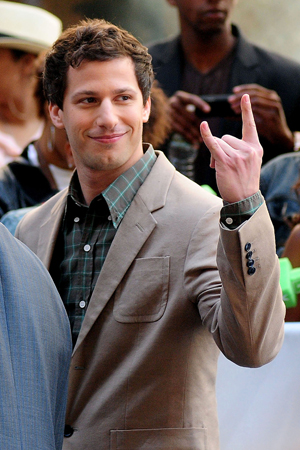 After announcing his departure from Saturday Night Live, Andy Samberg has decided to defiantly separate himself from the show, and not in a profound, metaphorical way — we mean physically.

He’s going across the pond to England.

Oh, blimey. Samberg’s gone doolally! The actor is going to hit the Britannic shores to star in a new BBC series, Cuckoo, in which he will play an American hippie-type man fighting a proper British papa (Greg Davies) for the affections of his love interest (Tamla Kari).

While we are very excited to see Samberg on a new playing field, we must proceed with caution. The actor will be headlining the show with comedian Greg Davies, who is the Brits’ rough equivalent of our Russell Peters. That’s some tough competition for the spotlight, especially since Davies is naturally predisposed to attention, standing at over 2 metres in height!

Another thing to be wary of is the humour translation, and by that we mean the transition of American humour to British, because they are quite different. American humour is for cheap laughs and quick, dirty, vulgar jokes. The Brits want all of that plus the bonus of cleverness. Luckily the show is written by Robin French and Kieron Quirke, both Englishmen.

The show is scheduled to air later this year, so better subscribe to those BBC channels.