We’re used to seeing Lady Gaga in outlandish gear, but this is just gross. The singer has commissioned a team to create some head wear filled with live insects. Which insects? Brace yourself. 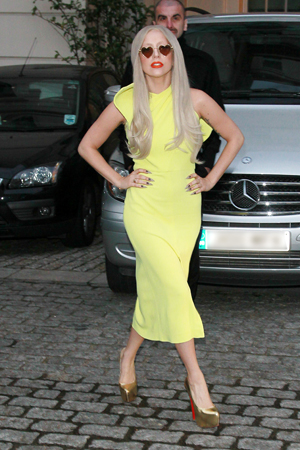 OK, now at the very least, if Lady Gaga annoys you, you can actually call her a pest…

The songstress has commissioned the creation of head wear filled with live cockroaches. Hopefully you weren’t in the midst of eating…

But ’tis true. Gaga has decided to harness the power of this immortal insect and transmit it into a fashion statement.

Where did she get this brilliant idea? Science, my good woman/man! Science!

A group of engineering students in New York, whilst studying movement in insects, discovered that cockroaches altered their moving patterns when exposed to Gaga’s music — you could even say they were dancing.

Oh, you know, nothing like a dose of “Marry the Night” to get a roach shaking his disease-brimming booty. We may have just found Gaga’s destiny…

But moving on, the singer read the study, loved it, embraced it and saw an opportunity.

“Lady Gaga has been looking to top her famous meat dress for some time — and this could be it. She dubbed cockroaches ‘my real-life monsters’ after hearing of the recent study,” said a source to The Sun.

“Now she wants to incorporate them in a headpiece by having them crawling around inside a netted cage.”

Oh, le puke. Maybe the pole incident had a bigger impact on her than we thought.

So, with the image of a hat filled with nature’s little demons, we leave you. Process, discuss and opinionate. Godspeed!