Rihanna isn’t exactly herself in her latest ad. The sexy R&B singer is raising eyebrows and questions after it’s been revealed that she used a body double for her clothing commercial. 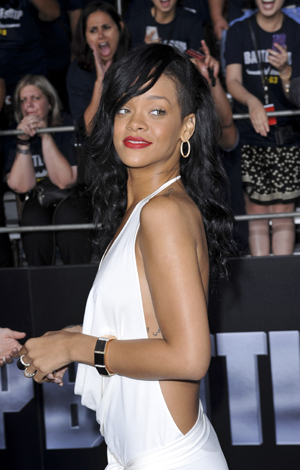 Rihanna, shy about her body?

No way! Or maybe…

The “Talk That Talk” artist is facing questions after it was discovered that she used a body double for her Armani ad. The Sun claims the 24-year-old Barbadian beauty did appear in the ad, but that the revealing shots of the body, butt and torso are actually of Irish model’s Jahnassa Aicken.

“It’s shocking Rihanna wanted one considering she loves posing with no clothes, plus she’s in great shape,” says a source to The Sun, who found out the model was the body in the ad.

Wait, we just have to ask: Why in the world would Rihanna use a body double? Does this woman not understand just how ridiculously hot she is and how perfect her body is? We definitely don’t think it’s nerves about showing some skin, since Rihanna is no stranger to taking sexy photos of herself, such as wearing a bikini while on an exercise machine.

The singer hasn’t given a reason for using a sub-in body, but the Advertising Standards Authority (ASA) will investigate the ad if it receives complaints from consumers.

I think the only complaint we have here is Rihanna’s not using her whole body and being confident about who she is and how she looks!