And we weren’t even invited! Matthew McConaughey quietly wed his long-time girlfriend Camila Alves at their Austin home, with close friends and family present. 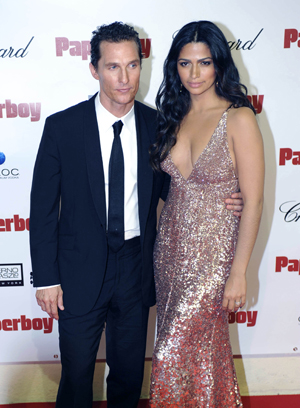 You can take a man out of the South, but you can’t take the South out of a man.

And so, with a heavy heart and eyes full of tears, we must inform you that Matthew McConaughey (as promised) married his long-time girlfriend, Camila Alves, in Texas this weekend.

According to E! News, the arrangements began on Friday, and the guests stayed overnight in luxury tents (with air conditioning!) in the back garden of the couple’s Austin home. The colour scheme was yellow and orange — a bit unusual, but we’ll take it.

The reception was filled with Brazilian deliciousness from Estancia Churrascaria (steak house), including steak, chicken wrapped in bacon (an ingenius invention) and pork sausages with cheese bread.

Just sounds like a homey wedding for humble millionaires.

To refresh some memories, McConaughey met Brazilian model Alves back in 2007, and they announced their engagement on Christmas Day. They have two children together.

Now we must resort to sobbing over McConaughey’s Dolce & Gabbana ads and ogling his unmarriedness in the upcoming film Magic Mike (out June 29). It may be sad, but… No, it’s just sad.

How will you be grieving the actor’s change in status?