While most celebrities complain about paparazzi and public scrutiny, Jake Johnson is speaking out about a bigger problem: man hugs. 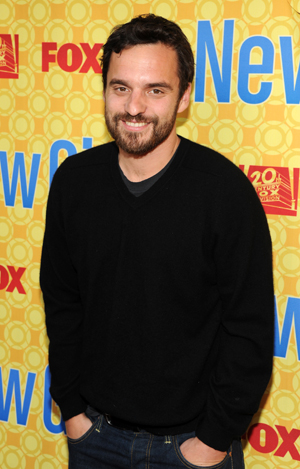 Jake Johnson‘s name (not to be confused with Jack Johnson) may only now be entering your daily celebrity name-dropping routine, but this star is on a speedy way up.

Recognized for his role as the sarcastic, unenthusiastic Nick Miller on FOX’s New Girl (starring Zooey Deschanel), Johnson is new to the fame game. But with the rising popularity of the show, he’s already getting some Hollywood street cred (like a role in an independent film, Safety Not Guaranteed).

In a recent interview, the actor revealed that the oddest thing about fame is actually all the touching and “man hugs” he receives from fans.

“It confuses me a little,” Johnson told the interviewer. “We’ll have our arms around each other, and I’ll think, ‘Our ears are touching.’ It’s not offensive. It just doesn’t need to happen. My brother is my best friend in the world, and in our lives, we’ve hugged 15 times.

“With fame, you can’t be that guy who says no. So the surprising thing of fame is the amount of man arms that have been around my shoulders for photo opportunities.”

That just sounds like… a nightmare? He’s obviously not gone through his fan mail, which is bound to contain several locks of hair, vials of unidentified bodily fluids, explicit poetry and probably some nude photos.

Johnson is obviously here to stay; he’ll be well loved in the indie film society. So he should get used to those man hugs and perhaps prepare for something more outrageous (since fans are cray-cray).

Case in point: Justin Bieber‘s galloping fangirls extravaganza. While on Alan Carr’s show in London, for example, hundreds of screaming fanettes broke through the security barriers to catch a glimpse of the teen star. Or two weeks ago, in Oslo, Bieber was physically chased by hundreds of girls when he left a restaurant.

So, Mr. Johnson, those man hugs sure seem great, don’t they?

Something to think about. Godspeed.