It’s time for Matthew McConaughey to marry, ladies. The actor will take the plunge with Camila Alves this weekend in a secret wedding ceremony. 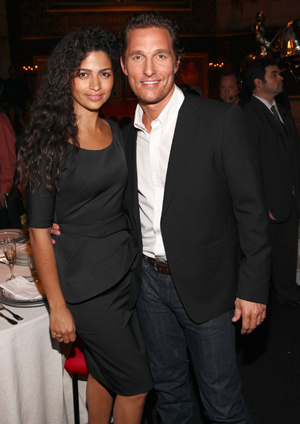 Can you hear that? It’s the sound of millions of women sobbing…

The couple is planning to tie the knot in a secret (until now) ceremony this weekend at their Texas home. The wedding is going to be attended by about two dozen close friends and family. And (fun fact) the staff involved in the preparations had to sign a nondisclosure agreement!

Wouldn’t you feel like you’re a part of something amazingly important to national security if you had to sign a keep-your-mouth-shut contract?

The two began dating in 2006 and got engaged during the Christmas season. They have two children together, 4-year-old Levi and 2-year-old Vida.

If you’re completely devastated by the news, perhaps watching McConaughey half nekkid and all stripperlike in Magic Mike will bring you some small comfort. The film, starring Channing Tatum, revolves around a pro stripper, Magic Mike (Tatum), who works at Club Xquisite, run by former male exotic dancer Dallas (McConaughey). The plot line is a little muddled in our minds; we just know the film is full of undressed men. It’s scheduled for release in Canada on June 29.

Congrats to the happy couple! And now we must cry bitter tears of jealousy. Excuse us…