Jason Alexander is reeling himself back in after falling overboard with his own joke. The actor came under fire for an offensive “gay” commentary on cricket. 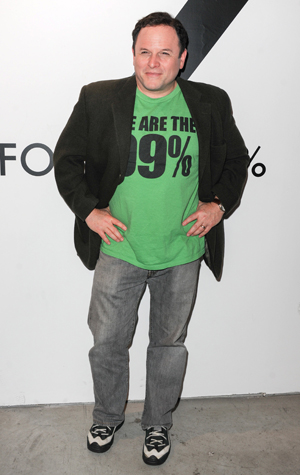 Every single day, there are moments when all of us are faced with the choice of either saying something really stupid or keeping mum. Unfortunately not everyone makes the right choice.

Case in point: Jason Alexander (or George Costanza of Seinfeld, as he’ll forever be known as) had a fit of verbal diarrhea on The Late Late Show with Craig Ferguson when the subject of cricket came up. Be warned: You may want to punch him in the kisser in about 30 seconds.

“You know how I know it’s kind of really a gay game? It’s the pitch. It’s not like a manly baseball pitch. It’s a queer British gay pitch,” the actor told the host.

“There’s a lot of people wearing white. People wearing helmets for no discernible reason… Everybody breaks for tea in the middle.”

Oh yeah, that happened. We don’t need to point out the obvious annoyance that the word “gay” seemed to be used to act as a blanket word for anything considered not overtly macho, or the multitude of stereotypical assumptions squeezed into that short statement.

A comedian by all means can criticize or mock a sport of his or her choice, but unless you’re 13 years old with an underdeveloped vocabulary, the words “queer” and “gay” should not even cruise as daily adjectives in your arsenal. Get a thesaurus.

Naturally after being bombarded with hate and extensive lectures via Twitter (and other media outlets), Alexander released an apology through a blog statement.

“My daily life is filled with gay men and women, both socially and professionally. I am profoundly aware of the challenges these friends of mine face, and I have openly advocated on their behalf. So, I can only apologize, and I do. In comedy, timing is everything.

“And when a group of people are still fighting so hard for understanding, acceptance, dignity and essential rights — the time for some kinds of laughs has not yet come. I hope my realization brings some comfort.”

Although we cannot take him to the guillotine after his apology, the aroma of his offence (reminiscent of Mel Gibson) lingers…

So here’s the issue: Does comedy have limits? What or where is the line that even comedians should not cross? Sharesies.