Is he or isn’t he? Kris Humphries has a lot of explaining to do, as more rumours are adding to the fire that the basketball star is in a relationship with a new woman — a claim he adamantly denies. 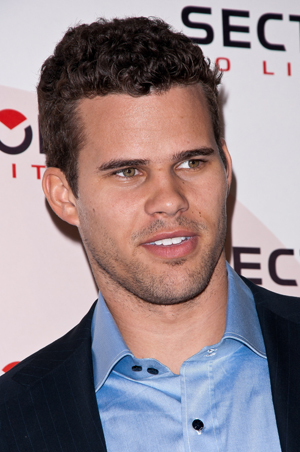 Move over, Kim Kardashian. Kris Humphries has a new dark-haired beauty in his life.

After getting on his soon-to-be ex-wife’s case about rushing into a new relationship with her rapper beau, Kanye West, and vowing to not get into a relationship until his divorce to the reality queen is finalized, Kris Humphries reportedly has a new lady friend. According to TMZ, the NBA player is being linked to a 25-year-old hotel worker named Fatmire Sinanaj (who goes by Myla) after the two were spotted on a Miami beach together.

The entertainment website claims Kris and Myla have been seeing each other “since mid-January” and that Kris has been romancing his new girlfriend by giving her court side tickets to basketball games and by flying her out to Miami for the weekend.

Good for you, Kris. You’ve finally moved on. Well, sort of. You see, the 27-year-old is totally denying that this fling is anything serious, and sources tell RadarOnline.com that Kris was just having some fun.

“Myla and Kris are absolutely not in a relationship,” says a source to RadarOnline.com. “Have they hooked up? Absolutely, and she was pressuring Kris for a commitment, but he has been very honest with her that there was no way that was going to happen… He is going through this divorce, and he just doesn’t want to get serious, with anyone.”

Well, so much for Kris finding new love and being happy. Sorry, Kim. Looks like Kris will still have his eyes focused on everything you do until you guys settle your divorce.