What goes up, must come down… Or so they say. Debra Messing is known to be dating another man, but the divorce papers from her husband, Daniel Zulman, have been filed just now. 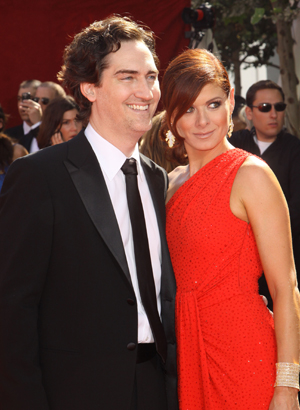 Oh well, there goes our hope for a reconciliation…

Debra Messing has oh-fee-shaw-lee filed for divorce from her husband of nine years, Daniel Zelman.

The couple met at NYU in 1990 and married on September 3, 2000. While they have been separated since 2010, the pair continued to live together in New York (we suppose the divorce will change that). The Smash actress requested joint custody of the couple’s 8-year-old son, Roman.

Living with the partner you’re separated from seems kind of contradictory, no? Did they divvy up the house into specific zones for each other or wear paper bags whilst in the same room? How does that work?

Regardless, since the split-a-roo, Messing has been a-messing (get it?) with Smash co-star Will Chase, who just happens to also be in the midst of a divorce. Whaddya know?

Making lemonade with the axed characters of Smash
Britney Spears wants to smash into a new role
Who are you wearing? Smash