The words you are looking for are “holy mackerel!” The star of Hannah Montana — Miley Cyrus — is indeed engaged to The Hunger Games’ hunky-hunk, Liam Hemsworth. 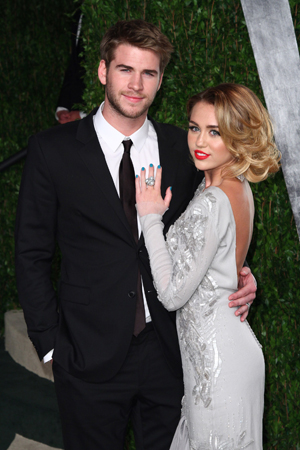 Oh-em-Gee, y’all! Even though she denied rumours of an engagement back in the spring, we just felt it in our little bones — and now it’s true!

Oh yeah, high fives for teenage marriage. The 22-year-old Hunger Games star proposed to the 19-year-old pop starlet on May 21 with a 3.5-carat diamond sparkler designed by Neil Lane.

“I’m so happy to be engaged and look forward to a life of happiness with Liam,” Cyrus told People magazine.

The wedding date has not been set yet. The couple met on the set of the film The Last Song back in 2009 and have been attached at the hip since (minus a brief breakup in 2010). Obviously this is a first marriage for both of them.

Initial reactions? One cannot help but feel a little skeptical, considering Hollywood has the highest divorce rates in the world and these two are so young. But let’s put on a brave face and hope for the best, yes?