Oh, sweet liberty… Where art thou? In support of President Barack Obama, Sarah Jessica Parker and Anna Wintour, through TV spots, have raffled off a chance for a celeb-studded dinner. But is star power helping or hindering Obama’s chances? 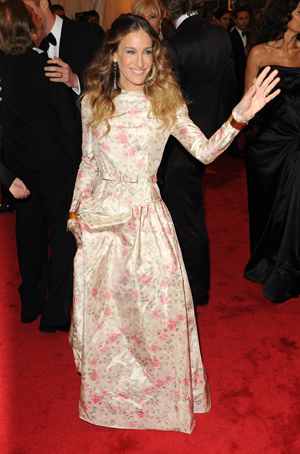 We’re not really used to political drama here up North, but those Americans sure like to keep the fire burning… Here’s some news from the Obama vs. Romney battle 2012.

Sarah Jessica Parker (or Carrie Bradshaw of Sex and the City) has joined forces with Vogue editor-in-chief (and the fashion world’s equivalent of Zeus) Anna Wintour for a fundraiser in support of Team Obama.

The actress is holding a raffle to attract the common fellow/small-dollar donor for a chance to win a dinner with Parker (at her home), Anna Wintour, el presidente and Michelle Obama.

Parker’s 30-second Obama campaign video ran three times during the MTV Movie Awards on Sunday; the actress was keeping it casual, referring to the president as “that guy.”

“OK, the guy who ended the war in Iraq, the guy who says you should be able to marry anyone you want, and the guy who created 4 million new jobs, that guy…” she told the cameras, with glittery eyes and a familiarity that makes you want to hug her.

The TV spots (along with Wintour’s campaign video) garnered buckets of criticism and negativity. The fashion mogul was the easiest target, of course, what with her British accent and stench of 1 per cent permeating the television screen. Wintour is the very symbol of glamour and narcissism, so why should the common people listen to her? The Republicans actually retaliated with a video mockery of Wintour’s TV spot.

Then came Parker, being criticized — or rather, insulted — from head to toe, mostly concerning her looks (the word “horse” was thrown around often).

Then it was Obama’s turn, even though the president did not appear in any of the television spots, much less assert his platform in them. Just from watching Wintour and Parker invite the viewers to dinner, the Republicans have deduced that Obama has lost touch with the ordinary folk, that he is desperate for money and approval of celebrities, that he is cheapening and commercializing the presidential race and so on and so forth.

“The Obama campaign is very, very worried about money. Their latest effort to get the big bucks is being mocked mercilessly by the Republican National Committee,” said Jennifer Rubin of the Washington Post.

So here is the moment where the bubble bursts. Obama must actually be very in touch with his people, because the gossip magazine People is more popular than any political or fashion magazine publication in the U.S. Which means celebrities matter to the average American, which means the president has done his research and is appealing to his key demographic: the ordinary, lawn-watering, sleeves-rolled-up, dinner-at-six men and women. Bam!

Curiously enough, Romney was promoting a fundraiser for his campaign recently as well, which involved a raffle for the opportunity to dine with the politician and — wait for it — Donald Trump, a business magnate as well as a television celebrity. Oh yes, what you are smelling is hypocrisy and, as the Republicans have kindly pointed out, a desperate need of money.

Just something to think about… We can’t vote down South, but no one said we can’t roll around in the dirt and drama. Opinions?

The campaign to get Obama to host SNL
George Clooney raises $15 million for Obama’s campaign
Drake to play Obama?