Who knew he had this side to him? Actor Ashton Kutcher has decided to try a life of the open road after spoiling himself by buying a new motorcycle and riding in the sunny streets of Los Angeles with his other motorcycle friends. 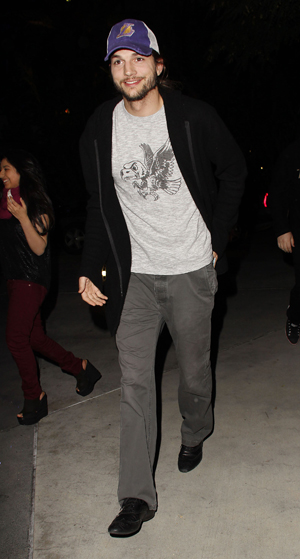 Ashton Kutcher was born to ride — especially now that he’s got a new a ride.

The Two and a Half Men actor has made the ultimate manly man purchase and bought a Harley Davidson, which he debuted in Los Angeles, according to the Daily Mail.

The 34-year-old actor looked like he was revved up and ready as he donned a green-and-blue checkered shirt and some rustic-looking black shoes, showing us he meant business when it came to not only riding the two-wheeler, but also to looking the part.

Who knew Ashton was such a hog head?

Besides showing off his ruff and rugged looks on his new bike, Ashton also had his own mini-motorcycle gang, which featured himself, his friend and a mystery blonde who is now receiving a lot of attention as being rumoured to be the actor’s new lady companion. But we’re sure Ashton is more focused on his new and very expensive toy and letting the wind blow through his hair as he rides down the roads of L.A.

Ashton isn’t the first celebrity to purchase a bike in 2012. In April, teen pop star Justin Bieber bought a $20,000 Ducati Superbike 848 similar to the bike his mentor Usher has.

Here’s an idea: Ashton and Justin should get together and start a celebrity motorcycle gang, and we know who would be the perfect next member: Ryan Gosling. Ah yes, that would be fabulous to see, wouldn’t it?