Well, enough of the hearsay, already. Miley Cyrus claimed the sex scene in her latest flick was a breeze, but her co-star, Douglas Booth, says it was a toughie. 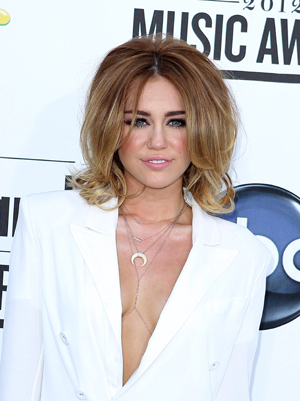 Oh, the differences between Americans and the modest British. Take Miley Cyrus and Douglas Booth in the film LOL, for example…

The 19-year-old mega-uber-star debuted her first onscreen sex scene and had no issues relinquishing the juicy details of the process (leg here, hand there) or the fact that she forgot to shave her legs. She would probably have no problem giving a play-by-play upon request, but the public’s not ready yet.

Needless to say, she found the process easy peasy and fun.

The Brit boy toy Douglas Booth (Cyrus’ co-star, the other half of the sex scene), on the other hand, did not find it quite as amusing.

“We actually filmed the sex scenes on the first day, so it was incredibly awkward,” the actor confessed to Mandrake, adding, “Miley is great. She’s in a completely different stratosphere from me.”

Oh man, do we smell a diss or a tinge of douchebaggery?

Although you have to admit, the subject of sex seems to still be on the hush-hush back in merry ol’ Britannia. Admittance of its existence and enactment would be as existentially revolutionary as a realization that half the English language is actually French… Le gasp.

Nonetheless, how can one individual be comfortable in a situation while the other is completely out of element? Someone ain’t telling the truth.

What do you think? Was Miley playing it cool, or is Booth being too humble?