The actress has had many ups and downs, but she seems to be working her way back to the good side. Question is, are we ready to accept a drama-free Lindsay Lohan? 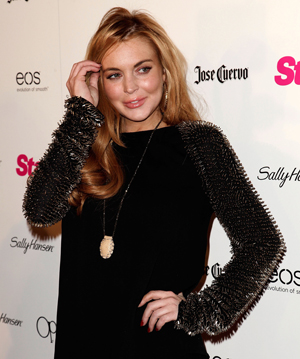 Well, the world’s gone topsy-turvy: Zac Efron has an unsightly moustache, Justin Bieber is being investigated for assault and now Lindsay Lohan may turn out to be a dedicated actress and a human!

Too much for our little fragile hearts!

Lately the 25-year-old actress has been hitting the breaks on the whole party scene and the whole being a felon thing, which is fantastic for all of us… closet LinLins fans. But we’re not sure if we can accept this new, “clean” Lindsay just yet.

Case in point: Recently Lohan was spotted on the set of the new Elizabeth Taylor film sporting the iconic actress’s dark brown locks (not literally — the same shade, that is). First of all, Lindsay was seen at work, which is already a hallelujah moment; second of all, she dyed her hair for a role, which shows dedication.

While words like “work” and “dedication” seem foreign when used in the same sentence as “Lindsay Lohan,” we may have to get used it. She’s, like, getting her life back on track and stuff…

But to make matters even more shocking, yesterday the actress was snapped shopping in Beverly Hills with bruises all over her legs, which leads us to theorize that Lindsay is… normal?

Aside from the fact that bruised legs are news in Hollywood, the photographic evidence shows that Lohan is not an alien full of cocaine and whisky, but a human being on the mend. Whaddya know?

It may be awhile before we stop suspecting that every bottle of water in Lindsay’s hand is vodka and every brownie is magic, but we’ll get there.