It is true. Kathryn Joosten of Desperate Housewives passed away peacefully on Saturday at her home. She’d been battling cancer. 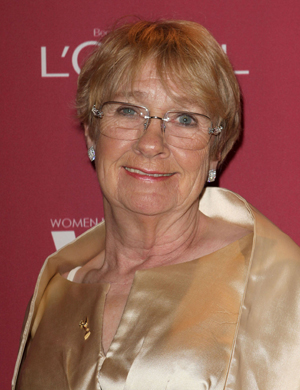 Kathryn Joosten, who played Karen McCluskey on Desperate Housewives, passed away on Saturday. She was 72.

The actress had been battling cancer for many years, being diagnosed with lung cancer for the first time in  2001 and again in 2009.

Joosten appeared in multiple popular television shows, but is best known for her role as Mrs. Landingham on The West Wing and, of course, as the irritating, gossipy Karen McCluskey on Desperate Housewives, which earned her two Emmys. The show ended last month with a season finale in which Joosten’s character also died of lung cancer.

The actress died surrounded by family at her home in Westlake Village, close to Los Angeles. She is survived by her two sons, Jonathan and Timothy.

Our condolences to the family. Godspeed!

Mistrial on Nicollette Sheridan’s Desperate Housewives case
Eva Longoria on split from Tony: “I am secure in who I am”
Eva Longoria and Eduardo Cruz split