Charlize Theron and Kristen Stewart may play mortal enemies on screen in Snow White and the Huntsman, but in real life, the new besties are involved in a serious she-mance. We couldn’t be happier — or more envious — of the two leading ladies, who are officially added to our list of favourite celebrity best friends. 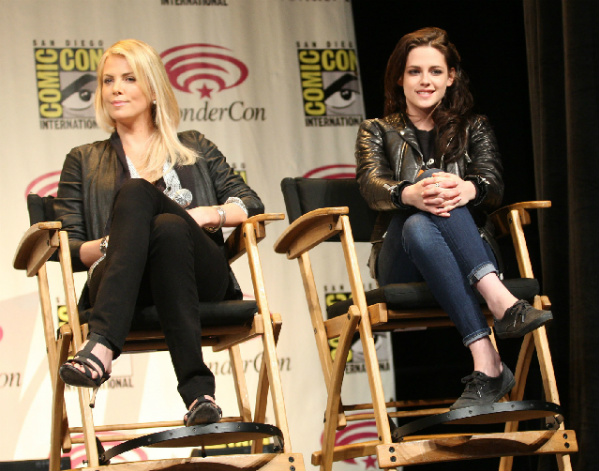 The fact that celebrities are friends with other celebrities is no real surprise; we all generally tend to hang out with people we work with, whether work is the office of a car insurance company or the tropical set of a new blockbuster feature. But just as we eventually zero in on one or two very special colleagues worthy of a much deeper friendship than those we only really care to hang out with at the bar on Fridays, celebs sometimes just click with their co-stars and establish lifelong friendships, filling us with fascination, envy and giddy disbelief that two people we so badly want to be best friends with are actually best friends with each other. Ladies: the celebrity she-mance.

The latest example of a superstar she-mance is the new-found BFF-ship between Charlize Theron and Kristen Stewart, who met while filming the newly released Snow White and the Hunstman. Though they play mortal enemies on film — Kristen is the Snow White to Charlize’s evil queen — Charlize and Kristen can’t seem to get enough of each other, relentlessly singing each other’s praises during interviews and gluing themselves at the hip on the red carpet.

It’s almost too much to handle that two of our favourite leading ladies — so seemingly different from each other in so many ways, with hugely contrasting career paths — suddenly find themselves in the coolest new best friendship in Hollywood. Do they let Robert Pattinson hang out with them? What are their inside jokes? What we wouldn’t give to be invited to that slumber party!

The unexpected but oh-so-wonderful Charlize-Kristen best friendship has officially made our list of the best Hollywood she-mances. And just who else is on that very special list? Well, we’ll tell you:

How very apt that Courteney Cox and Jennifer Aniston’s friendship is thanks to a little sitcom called Friends. Since its start in 1994, the two have been inseparable, seeing each other through relationship highs and extreme lows. Even all these years after the last episode of Friends, Jennifer and Courteney remain as tight as ever, though there has been some speculation that maybe their friendship isn’t quite what it used to be now that Jen’s attentions are all on her boyfriend, Justin Theroux. But we’d prefer to think of that as just catty fodder, and even though we know they both have gigantic mansions in the Hollywood area, we still prefer to think about them hanging out in that purple apartment.

Seeing these two besties together is a bit like looking directly at the sun: Each is so beautiful on her own that when they join forces, you can barely look in their direction for their sheer, blinding brilliance. Jessica and Jennifer, who met while fliming the ensemble rom-com Valentine’s Day, seem to just be peas in a pod. In their Marie Claire interview from a few years ago, the ladies were full of superlatives for each other and were just gushing with mutual admiration. Jessica and Jennifer also made special note of the fact that neither of them really gets to work with many women on set: Generally they are both surrounded by casts consisting predominantly of men. Valentine’s Day, though, gave them the opportunity to have some serious girl bonding time, which has clearly lasted well beyond their shoot days. Let’s just hope Ben Affleck (Jennifer’s husband) and Justin Timberlake (Jessica’s soon-to-be husband) aren’t the jealous types.

Here’s a she-mance no one would have expected. Ellen Page is everyone’s favourite anti-Hollywood indie star, while Drew Barrymore — who is a descendant of the famous Barrymore show business family lineage — has been living and breathing movies since she came out of the womb. And yet somehow these two women from starkly different backgrounds and career trajectories managed to develop a friendship for the ages when working together on Whip It! (directed by Drew and starring Ellen). Their love ran deep, and when the nature of their relationship was questioned after an image was printed of them kissing on the lips, Ellen and Drew explained very calmly that they just totally fell in friend-love. That kiss was as real an expression of how they felt as they were capable of communicating, so everyone just chill out. We dig, ladies. Now please invite us to your roller derby party.