Professor, professor! Oh yes, Maggie Smith is coming back to Canada to be honoured at the Stratford Festival fundraising gala. 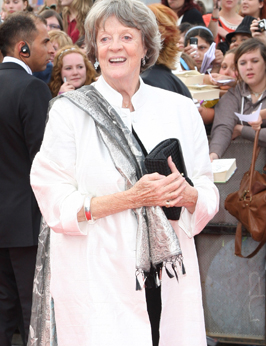 The world of the dramatic arts is rejoicing right now. Maggie Smith has accepted the invitation to be the honouree at the Stratford Festival fundraising gala.

Oh, memories. The older generations may remember seeing one of her performances or reading the rave reviews Smith received during her 32 years as the leading lady of the Stratford Shakespeare Festival.

The youths will recognize her as Professor McGonagall of the Harry Potter films — which ain’t half bad either.

Smith is to attend the gala at the Four Seasons Hotel in Yorkville on September 10; she will be receiving the Stratford Shakespeare Festival’s Legacy Award (it was given to Christopher Plummer last year).

“It is our honour to celebrate Maggie Smith’s legacy at Stratford, remembering her witty portrayals of the heroines of Shakespeare, Congreve and Coward, as well as her heartfelt dramatic roles in a range of Shakespearean and other classics. We look forward to creating a tribute worthy of her contributions to our stages,” stated general director of the festival, Antoni Cimolino.

The actress dominated pretty much every play ever written and has always been able to embody her characters with incomparable skill.

Hopefully we can sneak into the gala — Mission Impossible style — and steal a peek at the beautiful actress. Are you as excited as we are?