Move over, Victoria Beckham. Another little lady has stolen David’s heart. But don’t worry, because we know she has probably stolen yours too. The famous celebrity dad has opened up to the world that, almost one year later, he is in love with his daughter, Harper Seven, more than ever. 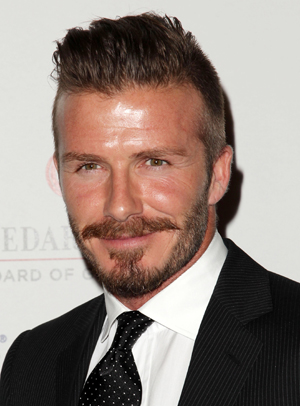 David Beckham may have just skyrocketed his desirability with the ladies even more.

The L.A. Galaxy footballer and famous hubby to Victoria Beckham spoke about his adorable daughter, Harper Seven, on This Morning in London, and it appears he is still lovestruck with the almost one-year-old tot.

“She’s relaxed, she’s feminine… That was the biggest thing for me. It sounds silly, but everything about her is feminine,” says David on This Morning, according to the Daily Mail. “It still amazes me every time I change the nappy. I’m like, ‘Oh my God, we’ve got a little girl!'”

Sigh… The feeling of love is mutual, David — we mean Harper, of course, not us. Well, maybe a bit us.

David and Victoria already have three boys: Brooklyn, 13, Romeo, 9 and Cruz, 7, but it looks like baby Harper balanced out the gender mechanics in this celebrity family, and the 37-year-old athlete says he’s pleased to have another female in the house.

“I’ve got friends that have got daughters, and they said how different it is having a little girl. And I didn’t realize how much it was until we had Harper,” says David. “To have three boys… There’s a lot of energy in the house. They are constantly on the go from the moment they wake up to the moment they sleep, and Harper is totally different.”

Maybe David is so in love with Harper partly because he’s just naturally drawn to females and they’re drawn to his handsomeness. Oh, and because, of course, he’s her daddy, and she just naturally has an instant connection to him!

More on The Beckhams