The musician was hospitalized after catching an icky stomach flu, but she isn’t letting her sickness get the better of her and is putting her best happy face forward. 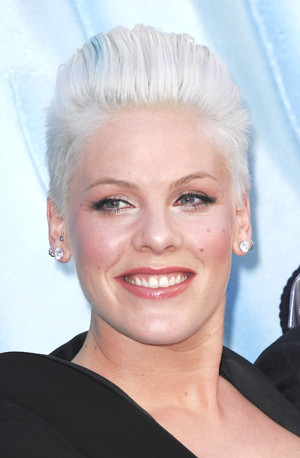 Pink is feeling a little blue.

The “Raise Your Glass” artist was feeling under the weather after contracting a stomach flu and had to be hospitalized. The pop rock singer took to Twitter and posted a picture of herself in a hospital bed to her 8 million-plus followers.

“Maybe it’s cause my mom was an ER nurse all my life- but throw me in a gown and a hook me up to an IV- and I’m a happy girl,” tweeted the musician. “Stomach flu sucks but morphine doesn’t.”

Aww, poor Pink. Even though she’s putting on a brave face, it must really stink to be sick and in bed — definitely not a night a rock star and mom dreams of. Using Instagram, the 32-year-old posted a photo of herself lying in a hospital bed, smiling cheerfully as she sips fluids from a cup. So positive, eh?

It’s unsure how Pink caught the nasty bug, but she shows her appreciation to her fans for the thoughtful tweets and jokes that her sickness is due in part to her nice personality.

“Thanks for all the get well wishes… I might have ulcers again. Because I care too much. It’s a gift.”

Well, we know all your fans just want you to get better, so get well soon, Pink!