It’s rare for a celebrity to use the paparazzi for their own needs, but Halle Berry is turning the tables by taking a bad situation and letting it help her. 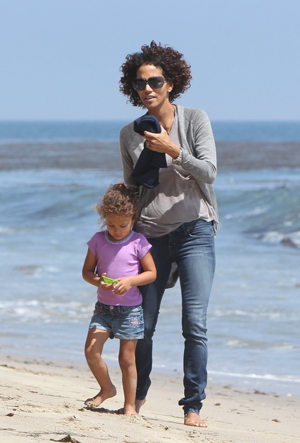 Halle Berry may be saying au revoir to Los Angeles — and it’s all thanks to the paparazzi.

The Catwoman star, who is engaged to French beau Olivier Martinez, had expressed her interest in moving to Paris with her four-year-old daughter, Nahla, and she may get her wish.

According to TMZ, Halle is using the unfortunate paparazzi showdown that took place at her daughter’s school as proof to the judge that she should be able to take her tot to a country where the paparazzi do not interfere with celebrities or their children. Her lawyer has called on Andrew Deetz to take the stand. He is the photographer Halle confronted after he stalked outside Nahla’s school to snap a photo of her, and now the celeb is going to prove her case with real live evidence as to why she needs to move out of the country.

We’re pretty sure Nahla’s father, model Gabriel Aubry, won’t be too glad about this, especially since the 45-year-old Oscar winner has a solid case to put forward to the judge when it comes to her child’s safety.

The actress’s lawyer will also use “expert witnesses” who live in the Eiffel Tower city to point out how the “culture” and respect toward celebrities differs between France and the United States.

Halle or Gabriel have yet to comment on this information, but Halle did make it clear she really dislikes the paparazzi hounding celebrity children, telling Access Hollywood that photographers have no right to bombard the famous tots.

“Our children should be off limits. They are innocent little babies that should not be exploited all over these magazine. I’m fair game. I get that. But my kids [and] kids at my children’s school should not be harassed like that.”

Halle Berry to paparazzi: “Our children should be off limits”
Halle wants to move to France with daughter
It’s official: Halle Berry and Olivier Martinez are engaged!