Proving there is no such thing as earning too many awards, Bob Dylan attended a ceremony in the White House to receive a special honour from President Barack Obama. 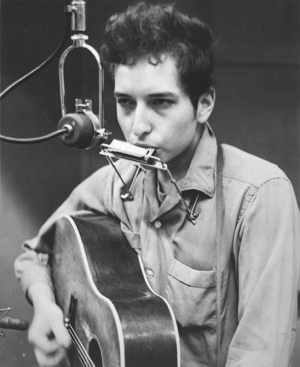 Well, the White House was hit by a hurricane — Bob Dylan, that is. The iconic songwriter was awarded the Presidential Medal of Freedom by Barack Obama yesterday. The president honoured 12 other accomplished persons, such as astronaut John Glenn, Nobel Prize winner Toni Morrison and former Secretary of State Madeleine Albright.

For the 71-year-old Grammy-winning singer (he has a mere 11 of them), it was just another day in the life of… Dylan previously received the Kennedy Center Honor in 1997 from Bill Clinton and a National Medal of Arts in 2009 (although he missed the ceremony).

Obama told the congregation that Dylan “captured something about this country that was so vital.”

The singer maintained his traditional bland visage, decorated with trademark sunnies, and just kept it super cool. Heh, is there a way to not be enticed by this man?

There ye have it. Opinions? Thoughts? Insecurities?