Katy Perry, the princess of perky promiscuity, has been meditating her way to a clearer head and a more spiritual existence. But what can this mean for her image? Is Katy getting ready to trade in her cupcake bra and Daisy Dukes for a linen robe and sandals? 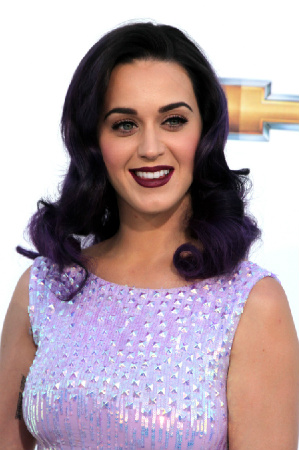 Meditating? Finding inner peace? Spiritual chanting? Sounds like Katy Perry is in the midst of a serious transformation. Everyone’s favourite bubble gum pop party girl, who has made her career singing about super-fun rambunctiousness and promiscuity, seems to have crossed over to the enlightened side. We’re not all that surprised, really: Katy’s kind of had it rough, what with her recent, slightly messy and very public divorce from Russell Brand. It’s no wonder she’s looking for ways to calm her mind and ease her spirit. Out with the memory-loss-inducing Friday nights, in with the mindful meditations at sunrise!

But what will this mean for Katy’s music? Surely such a monumental personal transformation will bleed into the singer’s career, lest Katy be regarded as the biggest hypocrite ever. Of course, that means we are probably going to have to brace ourselves for some blissed-out Katy Perry songs. Seems a little oxymoronic.

Before you write off Katy’s new-found spirituality as counterintuitive to her brand of music, consider that Katy isn’t the first musician to go from wild to serene. For other artists, personal and career reinventions resulted in undeniable success, the public happy to embrace their changes of pace. Breathe easy, you guys: If Katy’s likely reinvention looks anything like these singers’, we’ve got nothing to worry about.

To this day, Jagged Little Pill — Alanis’ 1995 hit rock album — remains one of our favourite albums ever. In fact, we’re such fans that we don’t even mind when four people sing “You Oughta Know” at karaoke in one night. But that angry, grungy Alanis made way for a much more peaceful one long ago. All of a sudden, after thrashing around, singing about the cross she bears and the apparent irony of “rain on your wedding day,” Alanis found herself standing peacefully still with hair down to her waist and thanking India. At first, people weren’t really sure what to do with this newly enlightened Alanis, her follow-up album to Jagged Little Pill — Supposed Former Infatuation Junkie — alienating her fans somewhat. However, it didn’t take long for people to accept that Alanis had just mellowed out, and just because her face was — and still is — fixed in a placid expression didn’t mean her music suddenly sucked. Actually, it got pretty awesome.

John Mayer was, for a long time, the voice of hip, laid-back sexiness. Well, at least his singing voice was: When it came to speaking, on the other hand, John’s was the voice of someone far more scattered and emotionally immature. After his highly controversial interviews with Playboy and Rolling Stone, John took a two-year hiatus from the spotlight to regroup, grow up and figure himself out. And now John has finally emerged from his cocoon — with a new sound and a very new look. His latest album, Born and Raised, is heavily influenced by the decidedly mature sounds of CSNY, with elements of folk music and Americana permeating the songs. As for his new image? The once boyish T-shirt-clad John has definitely gone for an older look — we’d even go so far as to call it “weathered” — with long, scraggly hair, a few extra pounds, beads, denim and a big cowboy hat permanently sitting on his head. All this may sound like a recipe for acquiring some disheartened and disgruntled fans, but John’s reinvention seems to have been working like a charm: Born and Raised has received pretty strong reviews, with some critics having called it his best album yet, and it recently entered the Billboard 200 at number one.

Yes, we know Madonna, the queen of reinvention, is currently on her MDNA tour — a high-octane spectacle of how agile and hip she is even at her ripe old age. But before her latest transformation into a super-taut dance machine, Madonna was finding her own spiritual — and highly controversial — path through Kabbalah, the ancient Jewish mystical practice. The one-time material girl had taken a hard left turn down the path of enlightenment and was suddenly more concerned with the soul than the flesh; she even started going by Esther for a while, a heroine in the Jewish biblical tradition. And hey, it totally worked for her. Not only did her fans eat it up, but Kabbalah became the hottest fad going, with celebrities and fans alike sporting the trademark Kabbalah red string bracelets. If Madonna, the mother of all club dance floor divas, can become the poster lady for Kabbalah and still maintain her popularity, then Katy Perry shouldn’t have any problem if she goes all namaste.

Elvis Presley’s crypt is up for grabs!
Paparazzi: Can’t live with ’em, can’t own a private jet without ’em
Madonna vs. Lady Gaga: A friendly jab or a deliberate diss?