Who runs the world? Obviously women do and this awards celebration just proves it. The Glamour Awards 2012 showcased, profiled and recognized the top women in entertainment and business industry, proving that women can be both powerful and fashionable at the same time. 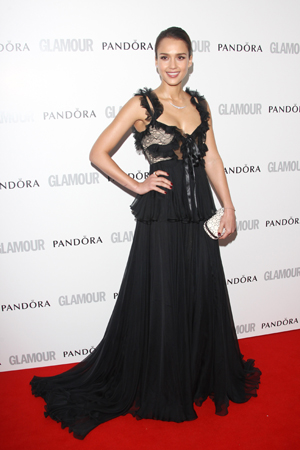 What do you get when you combine the most glamourous women in the world?

Well, besides a very fashionable party you would probably get the Glamour Awards 2012, which took place in London, England last night, and honoured all the glamorous women in the entertainment, music, fashion and business industries.

The event, which recognizes the achievements of powerful and influential women in the industries, had a red carpet full of beautiful women including Glee actress Lea Michele, fashion designer Donatella Versace and Desperate Housewives’ Eva Longoria.

And that was just the beginning.

The glamorous event brought out the glamour in everyone with the best in fashion, making this night an official fashion overload. Modern Family‘s Sofia Vergara looked sexy and sophisticated in a red, hugging dress, while young Hollywood actress Lily Collins made everyone envious wearing a dark green pleated knee length dress. But the real stunner was Jessica Alba. The 31-year-old wore an Alexander McQueen chiffon ruffle pleated gown that gracefully swept the floor.

But one of the really well-deserved awards was for super mom and actress Jessica Alba, who won an award for Entrepreneur of the Year, an award she deserves since co-launching The Honest Company, a line which sells toxin-free household products, diapers and gentle body care. In the June issue of Marie Claire, Jessica says that although she had to take a break to work for the company, she enjoys being a businesswoman.

“I started working on this three and a half years ago,” says Jessica to the magazine. “I took a year off from acting when I had Honor, and I was home with her, diapering her, cleaning up after her, and I had a real frustration that I couldn’t find healthy, nontoxic, and affordable products that actually worked. So I decided I needed to do something about it.”