Who said charity is painless? Gordon Ramsay and Will Ferrell had to walk off the soccer field after getting injured during a charity match. 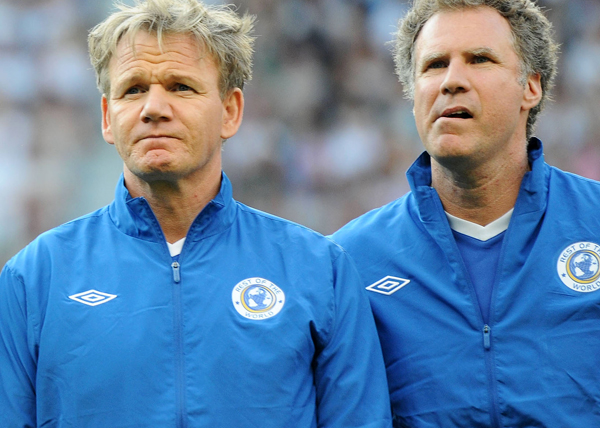 They’re just not as young as they used to be…

Gordon Ramsay and Will Ferrell had to be escorted off the field during a celebrity soccer match for UNICEF in the U.K., due to sustained injuries.

Oh, the lengths we go to for charity. So, what’s the damage tally?

Well, chef Ramsay had to actually be carried off the field on a stretcher and straight to the hospital after colliding with former All England forward Teddy Sheringham.

“Gordon was taken to hospital after injuring his back during the game. He was released after receiving treatment, and although he’s in pain today, there shouldn’t be any long-term damage,” a representative of the chef told Daily Mirror.

The paramedics must have learned some new words that day; we assume Ramsay was not wheeled off silently and was creative enough to say farewell in a colourful array of profanities. Thou beslubbering, ruttish crook-pated popinjay! That’s how the English swear, right?

Ferrell, on the other hand, was able to limp off the field independently, although reportedly with quite a bit of pain. But he fared better than Mr. Potty-mouth.

The match raised approximately $6 million for the charity and involved other (unscathed) celebrities, like Mike Myers, Gerard Butler, Woody Harrelson and Edward Norton. What a crowd…