Tonight’s episode of The Bachelorette is full of moments that will have you giggling with glee and booing with disgust. Emily Maynard’s search for love hits some road bumps, but a few of the guys still manage to treat her like the gorgeous Southern belle that she is. The old saying seems to ring true — sometimes you have to kiss a few toads! 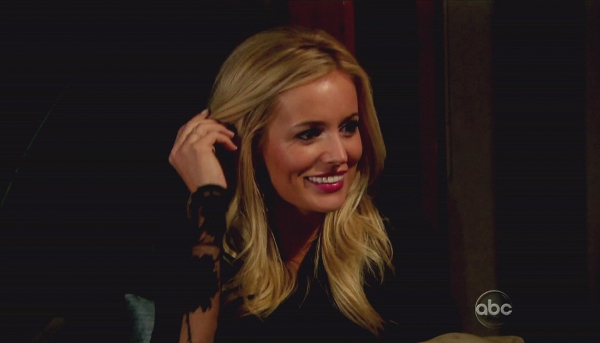 1. Chris and Emily’s high five after scaling a building

2. Emily telling Chris “If I saw you at a bar I would not come up and talk to you”

Granted, she clarifies it’s only because she finds him so attractive, but his initial surprise is adorably funny.

3. Emily’s friend trying to make off with Sean

For the group date, the men are interviewed and scrutinized by a group of Emily’s mom-friends. Emily’s friend calls Sean “a genetic gift to the world” and gets him to do push ups with her on his back. So, even if things don’t work out with Emily — at least he knows he’s still got options!

4. The guys playing with kids in the park

Ovaries all over the world seize up as the men tube-slide, hula hoop and play catch with a gaggle of kids at the park. Come on, attractive men playing with kids — if that doesn’t count as captivating TV, what does?

5. Ryan telling Emily she better not get fat

While the rest of the guys on the group date are enjoying their time playing with the kids, Ryan sneaks off to interupt Emily’s talk with her girls. But rather than improving his standing with the ladies he makes virtually every woman watching want to kick him in the teeth by saying that if they got married, Emily had better not gain weight. As he so “eloquently” puts it: “I would still love you, I just may not love on you as much.”

Tony is noticeably distraught at being away from his son. When Emily learns of this she graciously releases him home to his child.

It really isn’t possible to pick out just one “aww” moment from Arie and Emily’s one-on-one. From carnival games at Dollywood to a personal performance by Ms. Parton herself, the two seem completely in sync. Even Dolly notices they are so connected that it’s hard to believe it’s their first date. Emily’s statement in her follow-up interview says it all when she reveals: “I feel like I finally found him and I don’t want to screw it up.”

Emily tries to explain that the man she chooses should see Ricki as the “best bonus,” but he seems eerily secure in his belief that marriage and a daughter would be a “compromise,” as it would make his career more challenging. Emily manages to hold it together but there is no doubt from her expression that nothing but rage is simmering under her calm exterior. Unsurprisingly, he does not make it to the rose ceremony.

After her disastrous encounter with Alessandro, Emily is noticably distraught. Although some of the guys simply joke about her obvious frustration, a couple of them stand out in the way they flock to support her. Sean’s unprompted assurances that he would consider Ricki his own are highly welcome and Arie’s comforting kisses make them seem like a couple already.