Bad boy, bad boy, whatcha gonna do… Well, as surprising as it sounds, Justin Bieber is under investigation for assaulting a photographer this past Sunday. 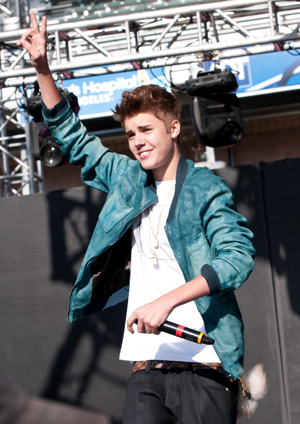 Aw, Justin Bieber is all grown up, assaulting photogs like all the big-kid celebrities.

Biebs is under investigation for allegedly assaulting a paparazzo on Sunday at the Commons at the Calabasas shopping center.

Yup, the Los Angeles county sheriff’s detectives are following up on claims that a photographer was struck by the singer after he would not stop snapping pictures of Bieber and girlfriend, Selena Gomez. The paparazzo was taken to the hospital and later released.

The couple was seen rushing out of the mall and photographed having a heated argument in the car.

The 18-year-old singer later tweeted, “My fans have always been there. from day 1. they are there for me thru everything. they lift me up. so… i’m there for them. always. #FACT.”

Well, if Biebs did indeed assault a photog, maybe the fans shouldn’t let that one slide. Also, maybe Justin needs to invest in some wigs, funky sunnies and non-hoodie sweaters… No one will ever recognize him then.