Ever wonder how Beyonce got her hot body back? Exercise, healthy eating and treating herself every one in a while. How simple, right? The musician reveals that her major weight loss was tough, but the reward of reaching her goal was worth it — including the special treat at the end. 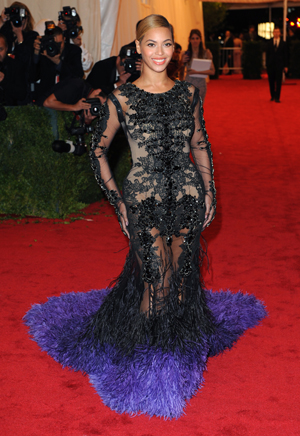 Beyonce has worked hard to get her hot bod back, and now she is going to celebrate!

The stunning musician has been wowing everyone with how fast she has gotten fit after giving birth to her daughter, Blue Ivy, in January, and at her Memorial Day concert in Atlantic City, New Jersey, this weekend, the pop diva admitted that getting her post-baby body back was a challenge.

“Y’all have no idea how hard I worked!” says Beyonce to her fans at the concert, which took place at Revel Beach’s Ovation Hall, according to Us Weekly. “I had to lose 60 pounds. They had me on that treadmill. I ate lettuce!”

She lost 60 pounds in a five-month period? Well, that’s pretty darn amazing, especially since Bey is a full-time mom and full-time musician. She definitely does put the super in “supermom.”

Yet even with the 30-year-old superstar’s admittance to losing all that weight, it seemed that from the beginning Beyonce didn’t take too long to get her bootylicious body back. In February, the new mom made her debut back on the scene at husband Jay-Z’s Carnegie Hall concert, wearing a very flattering and hugging orange dress that confirmed to the world Beyonce would never lose her beautiful curves — never. Earlier this month, the “Love on Top” artist’s personal trainer told Us Weekly that Beyonce looked good because she ate well and exercised five days a week.

“We do cardio and plyometric moves like lunges and jumps on and off a bench,” says Beyonce’s trainer, Marco Borges, to the entertainment magazine. He also says Bey stuck to “whole foods,” which included “vegetables and grilled meats.”

Sounds like a good, healthy lifestyle to stick to, but it looks like Beyonce put her healthy eating on the back burner for just one night this past weekend, revealing to her fans that she was looking forward to a very special treat as her reward for getting back in shape.