Chad Ochocinco’s recent devastating loss of his Starbucks gold card makes us reflect upon what truly matters in our own life. We desperately want to help Chad through this terrible time. But how? 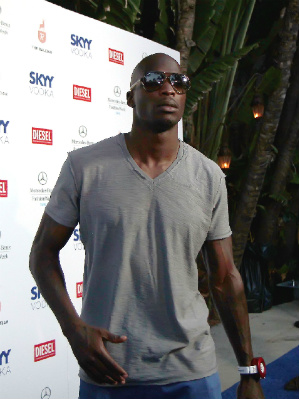 With issues such as poverty, global warming and hunger distracting us on such a regular basis from what really matters in the world, it’s often hard to remember the true suffering that many people face. And while we would never wish Chad Ochocinco‘s devastating plight upon anyone, we are grateful he has reminded us of a deeply important matter that we too often neglect.

We’re talking, of course, of the loss of one’s Starbucks gold card. Chad, the wide receiver and NFL star, experienced a devastating trauma recently when his wallet, containing his hard-earned Starbucks gold card, was stolen out of his car. Fortunately the wallet was later found in a Dumpster, but the card had been removed. Chad unleashed his agony on the world via a Twitter video, where he mourned the now lost cause of having bought so many lattes and lemon loafs. Not only that, but he apparently had $220 left on his card.

It didn’t take long for Starbucks to respond to Chad’s tragic circumstance, assuring him they’d send a new card. But even that didn’t heal his understandably irreparable heart; no man will ever be the same once he loses his precious Starbucks gold card.

It goes without saying that Chad has our undying support during this very difficult time. Yet while we encourage him to take as much time to grieve as he needs, it pains us to see him so destroyed; what we wouldn’t give to see his smile again! OK, so a new gold card from Starbucks isn’t going to make him happy. But we think we have some other ideas that will satisfy Chad and help him begin to move on with his life.

Imagine how elated Chad would be if he could walk into a Starbucks and ask for a drink named after him. It would almost make this whole mess worth it. We’re thinking something triple tall, very strong, with a sophisticated taste. And, of course, cut with some steamed milk to make it extra smooth. They could call it a “mochacinco,” and 22 cents from every cup could go to the “Help Chad find his gold card” fund.

First world problems are very real issues that permeate our lives on a daily basis. From not getting cell phone reception when you really want to send a text, to chipping your manicured nails minutes after leaving the salon, we have all experienced the devastation of first world problems. On his show, Chad could help lend a voice to all of us who have until now quietly endured these daily battles. We believe a project like this, in which he would have the opportunity to reach out and connect with those who can relate to his suffering, would have an enormously positive impact on Chad’s self-worth and help him know happiness again.

Who isn’t sick of the green mermaid, anyway? It’s time Starbucks changed its image to something with a little more pizzazz, and no one screams “pizzazz” like Chad Ochocinco. We imagine an image of Chad’s face similar in style to the famous mermaid, except it would be coloured gold (naturally), not green. Think of how much more you’d enjoy your no-whip mocha with Chad’s face staring back at you as you sip! We’re convinced this design makeover would bring Chad great joy.

Starbucks becomes the official beverage provider of the NFL

With a steady stream of Starbucks flowing through the stadium, we’re pretty sure Chad would be in a good place for the rest of his life. Who needs water or Gatorade when there are good old-fashioned venti extra-foam lattes lined up next to every bench? Sure, they’re scalding hot and the players stand to quickly grow dehydrated, but Chad would never have to pay for a latte (or a lemon loaf) again. And isn’t that what’s most important?