Is this the new royal wedding? Well, they are British. Keira Knightley and Klaxons musician James Righton are engaged! So, are we invited? 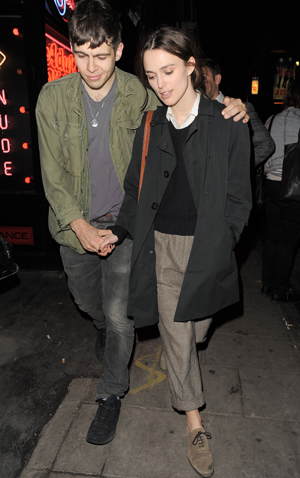 Govern-naw, we’ve got a wedding on our hands!

The 27-year-old actress met 28-year-old Righton in 2011 after being introduced by their mutual gal-pal, Alex Chung. They moved in together in East London just this year. So, let’s see… They’ve been dating about 15 months.

Oh, the Brits! While we date for four years before getting engaged, then stay affianced for another two years, only to then have more than half of us divorce after less than a decade of marriage… The English are on it: Meet, fall in love, marry. Ingenious!

This would be a first marriage for both stars. The details of the proposal and the future wedding have not been bequeathed upon the public yet. Keira Knightley is a secretive one.

Keira Knightley practices sex faces on Skype
What would you do if you had three weeks to live?
Michael Fassbender gets carried out of party