Oh, the suspense is intense, no? We’ve grown to love Kelly Osbourne as the rocker model for Madonna’s Material Girl clothing line, but she’s been replaced by another. 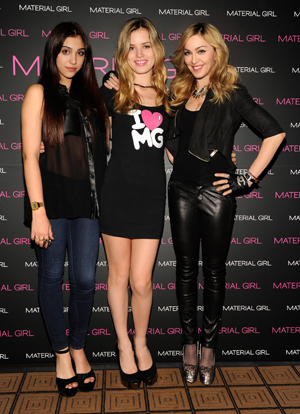 Yesterday Madonna “unveiled” the new face of Material Girl, to replace Kelly Osbourne. Any guesses who it is? It’s actually…

Oh, the memories. We recall how ecstatic we were to hear about the release of Madge’s edgy clothing line a few years back, which she happened to co-design with her 15-year-old daughter, Lourdes. Taylor Momsen was the first visage of the collection, who was later replaced by Ozzy Osbourne’s daughter, Kelly. Now it’s Jagger time.

What do you think? Can Georgia May pull it off? The clothing line oozes rebellious teenager. You know, the kind of kid who eggs your house or engages in recreational arson, maybe collects spiders’ legs or even spray-paints Munch’s “The Scream” on the front doors of an orphanage… Can Ms. Jagger really do it?

Something to think about… Opinions?