The actress got an extra lift on the set of What to Expect When You’re Expecting, and she says that although she didn’t enjoy wearing a fake baby bump, she enjoyed the double perky additions she got to wear for the movie. 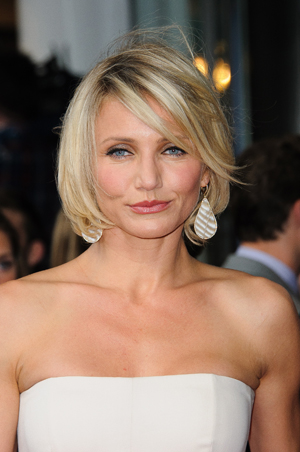 Cameron Diaz has experienced pregnancy and liked it — well, some parts.

The What to Expect When You’re Expecting actress appeared on BBC One’s The Graham Norton Show and told comedian Graham Norton that pretending to be pregnant had its perks — literally.

“The breasts got bigger and bigger. There was probably 15 of those weird silicon cutlet things in there. They were amazing, and I was like, ‘Wow, these are awesome!'” says Cameron on the show, according to the Daily Mail. “So I had to show them off to everyone, shouting, ‘Look at these!’ They looked very real!”

I guess it doesn’t hurt to have a little extra oomph, even if it’s not real.

The 39-year-old spoke about the prospect of being a mommy in the June issue of Redbook and said that even though people her age have children, she has decided to focus on her career.

“I’m sure a lot of people would expect that I would have had a child by my age. But it’s not what I’ve wanted out of my life thus far,” says Cameron to Redbook. “We still live in a largely chauvinistic world. There’s a box people put themselves in, and when you [live] outside of it, that makes them uncomfortable — they have to look at themselves and question their own choices.”

But even though the stunning actress, whose breakout roles include The Mask and There’s Something About Mary, says she enjoyed the fake boobies for her role in her latest movie, she says the prosthetic bump wasn’t exactly comfortable to wear.

“We were shooting in Atlanta, and it was very hot, and it got very swampy, and by the end of filming, these beautiful breasts were literally hanging down to my waist,” says Cameron. “I was so upset but thought, ‘Well, that’s nature. That’s what’s going to happen, anyhow!'”

Cameron Diaz didn’t expect to put off motherhood this long
Russell Brand sets his sights on Cameron Diaz?
What To Expect’s Cameron Diaz and Matthew Morrison on fake bellies and babies