Ellis, a high-profile criminal? Frank, a UFC fighter? Now that those two characters, along with Dev and Michael Swift, have been cut from Smash’s second season, we recommend ways for them to turn lemons into lemonade and try something completely new! 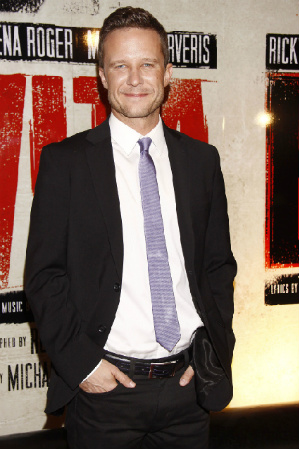 The good news is that Smash will be making a return for a second season next year, thanks to the heroic Josh Safran, producer of Gossip Girl and Smash‘s new showrunner. Finally Smash, with its inconsistent episodes and confused storylines, stands to be shepherded into glory and become the kind of show we all desperately hoped it would be when we first laid ears on the chilling “Let Me Be Your Star.”

The bad news is that for Smash to win its audience back, a serious massacre was in order, with four of season one’s featured characters axed from the second season roster. And who are the unlucky ducks? They would be Dev (played by Raza Jaffrey), Ellis (Jaime Cepero), Frank (Brian d’Arcy James) and Michael Swift (Will Chase).

Clearly desperate times call for desperate measures, and Smash was pretty desperate for a while there, with four too many characters apparently weighing the show down. Basically no one liked the character of Ellis, and Dev’s infidelity infuriated viewers. The other two men, who were caught in the torrid love triangle with Debra Messing’s character, Julia, felt totally superfluous, distracting us from the much more interesting goings-on of putting up the Marilyn musical.

But just because this quartet of characters now find themselves homeless, they shouldn’t abandon all hope. There are plenty of opportunities out there for these four men that would be much better fits than Smash ever was. And if they need help thinking of something, we’ve got some ideas:

We all know how much Ellis loves to eavesdrop, manipulate others and act strictly in the interest of his own personal gain. And while we can all agree he totally sucks, we will admit he’s got a cute face and could charm the pants off of anyone. Those qualities can be huge assets in show business, but as Ellis learned, they are not to be abused, unless you want to burn every bridge you build and destroy your chances of working in New York again. Not to worry, though. Ellis can still make good use of his sleaziness in the world of high-profile crime. With his people skills and ability to earn (and then betray) innocent people’s trust, Ellis would make a killing somewhere like Monaco, robbing a casino, or in Paris, heisting a priceless tchotchke from a museum. Danny Ocean must have room on his roster of handsome thieves for Ellis, and besides, isn’t it about time for an Ocean’s 14?

Poor Frank: First he finds out his wife was not only cheating on him, but was in love with the other man, and then, after somehow finding it in his heart to forgive her, he gets cut from the show. It really hasn’t been easy for this doormat of a high school science teacher. But instead of sitting around and accepting the sorry hand life has dealt him, we think Frank should seize this opportunity to let out his anger. Step one: Drop the books. Step two: Hit the gym. Step three: Become a UFC heavyweight. Let’s just see someone try to mess with his marriage again!

For Dev, being cut from Smash was a total blessing. What good did it ever do him to get mixed up with a bunch of show business types, anyway? Now that Dev doesn’t have to worry about the drama of putting on a show or having impromptu dance classes in his living room, he can concentrate on the glitz and glamour of the political world. With so many shows on TV that revolve around politics, Dev has his pick of the litter for a new government building set to haunt. And now that he’s so well acquainted with the sexual promiscuity required by those shows’ characters, he’ll have no problem slipping right into office — and bed — with a new cast.

To be honest, we don’t really care what Michael Swift does. He’s a home wrecker of the highest degree, shaking things up not only in Julia’s family, but also his own. We will offer these small bits of advice to Michael, though, now that his cut from Smash has him roaming free. 1) Stay away from us and our girlfriends, with your dreamy eyes and your pretty face. 2) So help us, if you ever stop singing, you will be sorry.