Aye, gentleman! The forgotten treasure of a well-groomed moustache is upon our periphery. Zac Efron shows off his new facial hair at the Los Angeles airport. 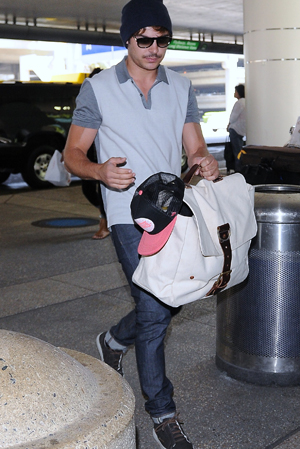 Well, as the English say, a man without a moustache is like tea without sugar.

Zac Efron must be feeling very English nowadays. The 24-year-old actor was spotted at the LAX airport in Los Angeles, sporting not only a man-bag, but also a lip-tickler.

That’s right. The iconic symbol of a macho man has nested upon Efron’s Apollo-esque visage.

While the actor is no stranger to the art of facial hair (he was a host for the sexy stubble for quite a while), this is really our first opportunity to see him with an authentic stache.

You may ask, “Gee, what kind of moustache is that?”

Well, reader, after a long and perilous search through the catalogue of stache styles, we have identified and successfully dubbed it as the “Clark Gable.” Take it or leave it.

Now, whether the moustache works for Efron or makes him look like a ’70s adult film star is for you to decide. For now, he is inducted into the ranks of fellow moustachio men, like Tom Selleck, Salvador Dali, Charlie Chaplin… Yosemite Sam. Oh, and that guy at the gas station who licks his lips every time you buy a pack of gum. Yeah, that guy.

What do you guys think? The moustache: a fantabulous lip decoration, or a filamentous biomaterial abomination? Sharesies.