Keep moving; no taking pictures here. Halle Berry, angry with the paparazzi for following her daughter around, is looking to change photography laws in Los Angeles when it comes to celebrity children. 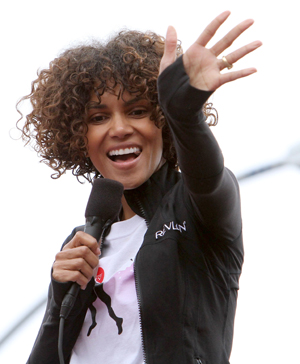 Watch out, paparazzi: Halle Berry is coming for you!

The Catwoman star thinks it’s time to get some laws in effect when it comes to photographing celebrity children, and she is ready to make the first move in the fight against the paparazzi.

“We are going to figure out what we can do on our local level in Los Angeles to sort of change some laws, because it is becoming child exploitation,” says Halle to Access Hollywood while at a Revlon product launch.

Halle’s dislike for the paparazzi snapping her daughter’s photo was caught firsthand when she confronted them while they were waiting at her daughter’s school. In a fit of rage, the 45-year-old celebrity lashed out at the paparazzi for stalking Nahla and waiting for her to leave school so they could take photos of the adorable tot.

This poor child! She can’t even do the most common kid thing — go to school!

The actress also spoke out about entertainment magazines and how they use the paparazzi photos to further publish celebrity children photos, which she says she really dislikes.

“When I open up all these magazines and I see all these children in them… Nahla was just in a magazine, and they said, what does she and — I think Gwen Stefani’s kid — have in common? They were both nose pickers, and I thought, ‘You know we are stooping to a new low when we prop up our children and exploit them like this,'” says Halle.

We totally understand Halle’s anger. After all, she’s a mom first and a celebrity second. But is it really a bad thing that people love to look at adorable celebrity tots and wonder how they enjoy living the good life? Sigh… Such a difficult and awkward situation for both celebrities and photographers, right?

Halle says she has no problem smiling for the camera, but she doesn’t want her 4-year-old child to be photographed unless she says so.