We missed her. Demi Moore is ready to come back post-Ashton divorce. The actress signed up to appear in an upcoming indie film starring Elizabeth Olson and Dakota Fanning. 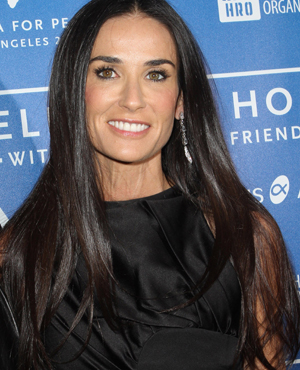 We’ve been focusing waaay too much on Demi Moore‘s private life, and she took notice. Which is why the actress is busy at work on a new film to distract us.

Oh yeah! Moore will be appearing in an indie film called Very Good Girls, directed by Naomi Foner (who happens to be Jake and Maggie Gyllenhaal‘s mama). She’ll play Elizabeth Olson’s hippie mom who believes in free luvin’. (Take that as you will.)

The movie is set to begin filming in New York in a few weeks. Other actors ready to dazzle us in this film are Dakota Fanning, Anton Yelchin, Dustin Hoffman and Sissy Spacek. Full house, people.