It’s Lindsay’s way or the highway. Or maybe not. The young actress is just about to film her new movie and says she wants to find the perfect co-star to act alongside her — and she’s being very picky about who gets chosen. 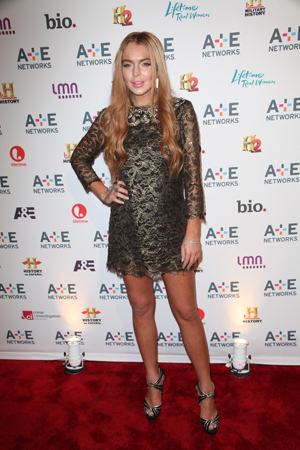 Take note, Hollywood actors: Not just any actor can play alongside Lindsay Lohan.

The Mean Girls star has been complicating the casting of a male lead in her upcoming Elizabeth Taylor Lifetime biopic, Liz & Dick. It is reported that the red-headed beauty is being very picky about who can co-star alongside her in the film.

“Lindsay declared that none of the actors [considered] were the right fit and that she wanted to go to London to look for a possible Burton actor there,” says a production insider who is working on the movie, according to RadarOnline.com. “Lindsay is being an absolute nightmare about who should play Burton.”

It sounds like Lindsay has the diva persona locked down, but is it really necessary to start acting like a diva now? However, we can understand why LiLo wants the perfect male lead. After all, this film will hopefully and ultimately get the troubled starlet’s acting career back on the right track.

Actors slated for Richard Burton’s character right now include Gossip Girl actor Matthew Settle, Sean Maguire and Craig Robert Young. But apparently none of these hunky and talented guys are good enough, and it is claimed that Lindsay doesn’t approve of any of them and “wants a major A-list star.”

But with reports that the movie will start filming in Los Angeles in a few weeks, the source says the producers will make the decision on an actor whether Lindsay likes him or not.

“The producers will try to land someone that Lindsay likes, but, if push comes to shove, they will just cast the role without her approval.”