Emily Maynard proves she’s a tough Southern belle in tonight’s episode of The Bachelorette. No contestant is spared as she focuses on finding love and the right father figure for her little girl. By the end of it all, Emily makes it quite clear that there are certain things that have to be present, or it’s the end of the road. 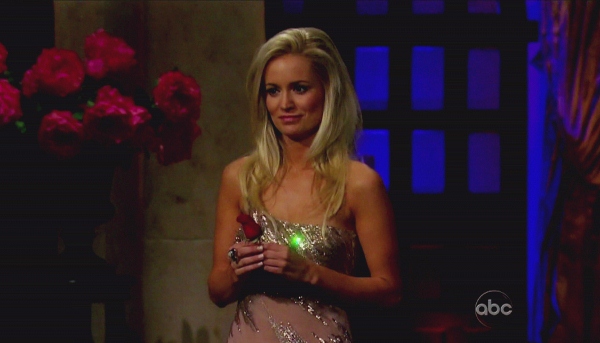 In the second episode of The Bachelorette, Emily pays compliments where she feels they’re due, but also isn’t afraid to get tough with the guys when it comes to protecting her and her daughter, Ricki. In gorgeous gown after gorgeous gown, Emily takes on two one-on-ones and a group date, and makes it clear exactly what she’s looking for in her future husband.

It’s not about the chase

Ryan almost seems less than impressed when initially told his one-on-one will consist of their making cookies for Ricki’s sports team. But he quickly rallies and manages to pull out of a nosedive when Emily jumps on his comments about “pursuing” women. She makes it pretty darn clear than any men interested in winning for the sake of winning had better hit the road ASAP. He manages to clarify his intentions are good and snags himself a rose.

There has to be a spark

Joe, unfortunately, is not so fortunate on his one-on-one. From the second she says he doesn’t give her butterflies, it’s pretty clear his time is limited. Poor Emily is brought to tears at having to let go of a perfectly nice guy, because she knows it isn’t the right fit.

You’ve got to be a sweetie

True, Emily does get tough with some of the guys, but she is also willing to make exceptions for certain sweethearts — like Charlie. When he tells her he can’t properly participate in the group date because of the disability caused by his accident, she makes it clear that honesty and cute-factor can go a long way toward winning her heart.

Emily’s toughness is a theme, but some of the biggest drama of the night happens while she is nowhere in sight and Kalon tells Doug he has put being a father “on hold” by coming on the show. Doug calmly but firmly puts him in his place and reminds Kalon that neither he nor Emily has done anything of the sort.

Emily may have eliminated the gentlemen she didn’t see a future with, but from the previews, the real fireworks happen next week when it appears a few of the guys let some less than stellar comments slip and she makes it clear she will not put up with their shenanigans. Stay tuned!