Laurieann Gibson, the newest judge to join the panel on Canada Sings, has the kind of diverse and fulfilling career most artists would kill for. But this multi-talented Canadian cares just as much about inspiring others to pursue their dreams as she does about realizing her own. Read on for our exclusive interview with Laurieann! 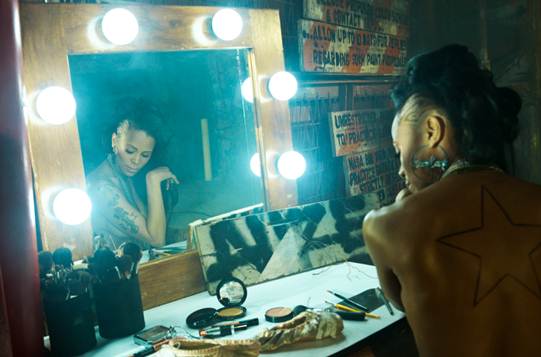 Canada Sings has officially begun its second season, with two very important changes this year. First of all, the prize awarded to the winning glee club — to be given to its charity of choice — has increased from $10,000 to a whopping $25,000. That’s quite a raise! More notably, however, is the addition of Renaissance woman Laurieann Gibson to the judging panel, who joins Jann Arden and Robert Van Winkle (a.k.a. Vanilla Ice) after the departure of Pierre Bouvier (Simple Plan’s lead vocalist) from the judging table.

It’s hard to conceive how Laurieann even has time to tackle this new endeavour of hers, given that she not only choreographs for some of the biggest names in show biz — she loves working with Katy Perry and says she’s having “loads of fun with Nicki Minaj right now” — but she has also just released her first album, with the promo record “Last Chance.” While Laurieann, whose main musical inspiration is Diana Ross, has always written music and heard melodies, she explains she was “insecure and afraid about her voice.” She realized, though, that to inspire others to sing and follow their passions, she needed to “free [her] own” voice and “reach kids in [her] own way.” Laurieann’s album, which she calls “a personal victory and a great source of inspiration,” will allow her to “go deeper and reach wider” than she ever has before.

But it isn’t just Laurieann’s album and her impressive choreography career that are so inspiring. At age 42, the homegrown Canadian could dance circles around anyone half her age. How on Earth does she keep up her energy? Cardio, working out and eating right are major components, she says. Most important, though: “A lot of prayer.” Good advice, Laurieann. Of course, downtime is another key ingredient to keeping healthy and sane amidst an otherwise hectic schedule. Laurieann’s activity of choice? “Going to the movies.”

We love a good flick too, but not as much as we like curling up on the couch and watching Laurieann do her thing on Canada Sings. It’s Laurieann’s self-proclaimed “honesty and passion” that make her such a welcome presence on the singing competition’s judging panel. Working alongside Jann Arden and Vanilla Ice has been a major highlight for her, as has “being home with incredible talented Canadians.” Laurieann, who credits her own Canadian heritage as having greatly influenced her artistic identity, stands fiercely behind the uniquely positive singing competition that is Canada Sings. “Everyday people reaching amazing goals, singing, dancing and fighting for someone else” is what she sees as the most remarkable aspect of Canada Sings. Being a judge on Canada Sings has given Laurieann many gifts, but most important, it has emphasized for her the reality that “someone somewhere else needs help; there’s so much to do to help others.”

For such a busy woman who wears so many different hats at any given moment — on top of everything else, Laurieann is also actively pursuing a career in directing — it would be easy for Laurieann Gibson to focus strictly on her own success and disregard the needs of those around her. But it is her generosity of spirit and her strong desire to inspire and help others through her craft that make her a truly unique talent Canada can be proud of.