Serious matter at hand. “Dog the Bounty Hunter” and his family are subject to a bombardment of death threats via email. 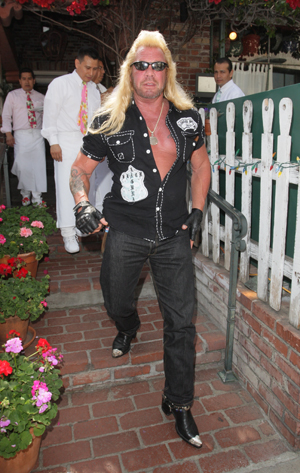 Well, Duane “Dog the Bounty Hunter” Chapman needs to sharpen that sense of danger, that’s for sure.

The reality TV star and his family have been recipients of an array of death threats via email that are now subject to an FBI investigation. Be warned, some of these are not pretty and quite descriptive.

On April 30, Chapman received an email (obtained through RadarOnline) stating:

“I’m going to murder you. I’m going to come to Hawaii and murder you and your family in cold blood. You are next on my list and are the bane of society. I will deliver you to God.”

The star received several other messages in which the perpetrator threatened to murder and violate Chapman’s wife and children — right in front of him.

The family sought the help of authorities and issued a public statement:

“The Chapmans are taking these threats seriously and are very concerned about the safety of their family. Duane Chapman said that when the person responsible is found, he will prosecute to the full extent of the law for the threats made against his family. A referral of the case has been made to the FBI in Honolulu.”

Oy, scary stuff right there. Hopefully the perp will get caught — and soon. Opinions?

More on Dog the Bounty Hunter