Conan O’Brien swung by the Late Show and chatted it up with David Letterman on Thursday. Yes, they did talk about Jay Leno. 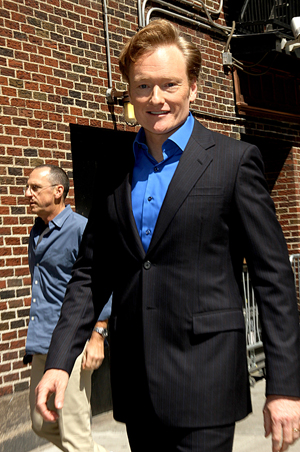 It was not quite the explosive festival of Jay Leno hatin’ we’d hoped to witness, but good enough…

Yesterday Conan O’Brien visited The Late Show with David Letterman, and of course the two hosts indulged in a bit of bitter bashing of fellow television personality Jay Leno.

Surprisingly Letterman led the anti-Leno extravaganza, beginning with, “I think the longer we just sit here, the more uncomfortable it will make Jay,” followed by calling him “a bit of a brat.”

Which pretty much opened up the Pandora’s box. O’Brien chimed in whilst pretending to be professional:

“We didn’t have a lot to talk about in common. I don’t own many automobiles that were made before 1904, primarily of brass and leather.”

And brought the moo-moos home by praising his new network, TBS.

“I’m very lucky. TBS lets me do whatever I want. They don’t watch it; they don’t care,” the Conan host stated.

So there ye have it. Don’t mess with late night show hosts. Opinions?